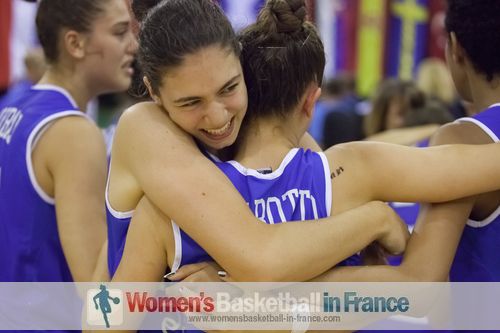 Italy have qualified for their third consecutive U16 European Championship semi-final appearance after surprising Russia (61-55) in the last quarter-final game in Albena.

Italy never trailed in the game and had a maximum advantage of 13 points (24-11) eight minutes into the first quarter.

Italy did not shoot the ball well for the rest of the game and were poor from the free-throw line, hitting just 10-of-25. They even lost the rebound battle (42-53). Yet with just 9 turnovers and 12 steals they were a little better than their opponents.

Francesca Pan who was having an up and down game was the hero of the day. Her clutch shooting from beyond the arc and athletic drives to the basket made the difference in the end. She finished with 24 points as the only player from Italy in double digits.

For Russia Raisa Musin and Alina Bespaltseva accounted for most of the points with 19 and 12 each. But with just 15 baskets from open play Russia would have needed to do better than 23-from-36 from the free-throw line.

With this victory Italy face the Czech Republic in the second semi-final match.