Turkey three-point their way to semi-final

Montenegro came into the EuroBasket Women quarter-final match as favourites but struggled to impose their style of basketballand were easily beaten by Turkey. Turkey defended hard and hit 9-of-14 from beyond the arc while neutralising the Montenegro attack.

Saziye Ivegin (right) went 4-from 5 from beyond the arc to lead all scoring with 14 points. Montenegro's first defeat in EuroBasket Women 2011 sees them playing for 5th to 8th place.

The round of observation lasted until the tip-off, which Iva Perovanovic won. Montenegro were quickly down the other end and Anna De Forge scored the first basket of the game.

Turkey took just over a minute to score with a corner trey by Birsel Vardarli.

The battle in the paint became more and more intense with Montenegro coming out on top (10-5) after five minutes.

However Turkey stayed in touch in the first quarter with their three-point shooting: Vardarli for the second time and Saziye Ivegin.

But Montenegro with 6 points by Perovanovic won the first quarter (16-11).

Turkey continued their charge with long distance shooting and fast breaks to draw level for the first time in the match (18-18) with 13 minutes on the game clock.

Montenegro continued to work inside the paint and regained the lead to go 6 points clear (27-21) with 90 seconds to play.

Turkey responded with their sixth three-pointer of the game by Ivegin to make it a three-point game going in the break (24-27).

Turkey started to play fast aggressive basketball and with 90 seconds left to play in the quarter Nevriye Yilmaz (left) completed a fast break (38-33) that forced the Montenegro staff to used a second time-out. Yet Turkey continued to be aggressive and went in the final quarter ahead (41-38).

France are in the semi-final after beating Lithuania

Emméline Ndongue returned to Poland and was on the bench to cheer her team-mates as they booked the last EuroBasket Women 2011 semi-final ticket.

Céline Dumerc was back to her best chasing everything down while Isabell Yacoubou-Dehoui's third-quarter burst turned the match for France.

Emilie Gomis was the leading scorer while Sandrine Gruda and Edwige Lawson-Wade kept the scoreboard ticking.

Lithuania were hampered with foul problems and conceded 22 free throws. They only went to the line 7 times themselves. The loss of Sandra Linkeviciene with 5 fouls early in the final quarter did not help their cause.

In 2007 Lithuania eliminated France during the quarter-final of the EuroBasket Women competition but still did not qualify for the AQT.

They now face Montnegro with the winner having to play Croatia for fifth place.

For France the dream of defending the trophy is still on.

Lithuania started the game calmly and scored the first 4 points of the game in the first minute through Sandra Linkeviciene and Egle Sulciute.

Then Céline Dumerc scored the first points of the game for France as the pace picked up.

France were quick and rough while Lithuania took things in their stride and slowly increased their lead.

Dumerc was called for an unsportsmanlike foul while scrambling for the ball as the intensity went up.

A trey by Ausra Bimbaite with two minutes to play in the first quarter gave Lithuania the first break (13-7). 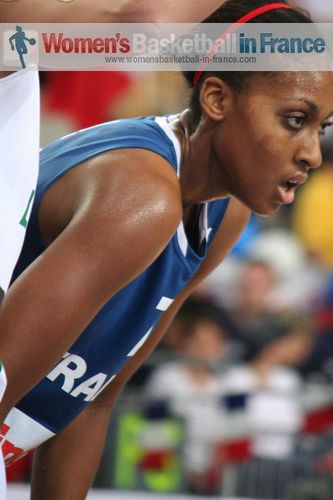 However points from Sandrine Gruda (right) and Isabelle Yacoubou-Dehoui reduced the deficit by the end of the first quarter (11-13).

Yacoubou tied the game for the first time with 2 points under the basket with the first points of the second quarter.

However Lithuania were back in front with a trey from Sulciute.

No matter what France did Lithuania continued to lead and restored their 6-point advantage with a trey by Marina Solopova (23-17).

But on the next attack Edwige Lawson-Wade knocked down a three-ball from the top of the arc.

Scoring became more and more difficult but both teams continued to excel in the art of three-point shooting.

With just under five minutes to play in the second quarter Lithuania still led (26-25).

Lithuania's team foul problems allowed France to stay in the game with Dumerc scoring 6-of-8 as France went in front with 39 seconds left to play.

Vaida Sipaviciute was allowed to somehow get through bodies in the paint to score the last points of the first half allowing Lithuania to go into the locker room leading (34-33).

Dumerc (left) got the show on the road with an AND1 to start the second half. France stretched their advantage shortly after with a fast break finish by Emilie Gomis.

However with 6:33 left to play in the quarter the teams were back on level term (38-38) after 2 points by Agne Abromaite.

Dumerc was everywhere for France, contesting rebounds and making life difficult for all the Lithuanian players.

She also increased her assist count as France regained the lead (42-38) with 4:14 left to play in the quarter.

France stepped up in all areas of the game. Yacoubou-Dehoui refused to allow any ball to escape as she poured a total of 11 third-quarter points.

France's domination of the quarter was completed by Lawson-Wade as she timed her run to perfection to score on the buzzer (53-42).

Things became more difficult for Lithuania with Linkeviciene fouling out of the game with still eight minutes to play.

Lithuania switched to zone defense and briefly stopped the French attack while reducing their deficit (49-55).

But once again the partnership Dumerc - Yacoubou-Dehoui came to the rescue for France (59-51).

The Lithuanian coaching staff called for a time-out and then their side came storming back with scores from Milda Sauliute and Gintare Petronyte.

However a finger roll by Gruda (61-53) allowed France to breath a little.

Although Solopova fired in a three-pointer for Lithuania France did not panic and kept their cool from the free-throw line to run out winners (66-58).

This match was more a case of which team recovered best from the defeat in the quarter-final matches the previous day.

Latvia's problems started early with Gunta Basko picking up 2 quick fouls in the first and a third one early in the second quarter.

Croatia were slower out of the starting blocks. But once Iva Ciglar (left) got going with back to back three-pointers in the second quarter the match started to go away from Latvia.

Croatia finished the match with 13 three-pointers with 5 coming in the final quarter.

Ciglar finished the game with 17 points and 9 assists. However the statistics do not show the whole story.

Ciglar was the driving force that kept Croatia in the race for a possible Olympic qualification while for Latvia the dream is over as they will conclude the EuroBasket Women tournament playing for 7th place.

EuroBasket Women match report: 13 three-pointers by Croatia were too much for Latvia

The game got off to a slow start with both teams recovering their energy from the games of the previous day. Iva Sliskovic opened the scoring for Croatia with a shot from under the basket.

Croatia were not having much luck with their perimeter shooting at the start of the game while Ieva Kublina (right) hit a shot from the land of many for Latvia.

The two teams traded scores for the first five minutes with Croatia coming out on top (9-7).

Iva Ciglar became a one-lady wrecking machine for Croatia during the second quarter as she scored 9 points and dished out 3 assists as her side overturned Latvia to go into the locker room leading (37-34).

The pace of the match picked up after the break as the two teams finished the cat and mouse game and started to attack each other.

The lead changed hands on a number of occasions. Yet Coatia held the advantage thanks to a trey from Lisa Karcic with just under four minutes to play (49-46).

Latvia used a time-out at this moment to slow things down. But moments later the Latvian bench picked up a technical foul.

Jelena Ivezic hit the 2 free-throws for Croatia and the game was swinging more in their favour.

With 90 seconds left in the third quarter, Luca Ivankovic muscled her way to the basket to score.

The Latvian coach once again called a time-out to rally his players as they trailed (48-56).

Nothing was going right for Latvia. With 8:50 to play they used their last time-out as the deficit had reached double digits (54-66).

Croatia hit five treys during the final quarter and never allowed Latvia into the game.

The contest was over with Croatia leading (76-56) with five minutes to play.