France came back in the fourth quarter to take Bronze

Sandrine Guda was a lady on a mission. She only missed two shots all evening in her game high 26 points. She also had 4 assists.

However her partnership with Isabelle Yacoubou-Dehoui proved to be decisive because France still had problems hitting the big shots.

Marion Laborde came off the bench and hit two big three-pointers for her team-mates to get on with the job offensively. Céline Dumerc and Edwige Lawson-Wade did what they needed to do at the end to keep the momentum for France to hang on to the victory.

For the Czech Republic the partnership Petra Kulichová and Eva Vitecková was at its best. But the shooting of Katerina Elhotova almost gave her team the edge they needed to get past France.

In the end their foul problems allowed France 18 visits to the free-throw line from which they scored 15 times which was the difference in an entertaining bronze medal EuroBasket Women match. On the other hand, the Czech Republic only had 8 free throws of which they made 7. 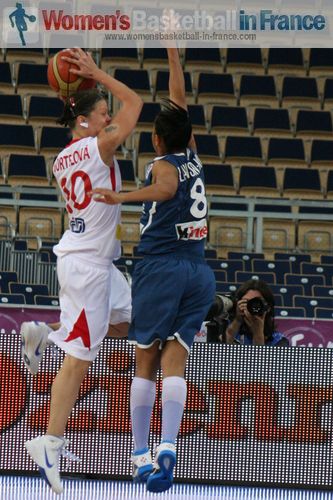 The two teams were quickly into their game with defensive systems already in place.

France got on the scoreboard first with Isabelle Yacoubou-Dehoui using her height and weight to force her way under the basket.

The Czech Republic responded on the next attack with Petra Kulichová.

Sandrine Gruda and Eva Vitecková traded two scores each in a aggressive but quick phase of the game. However the Czech Republic were able to take the lead with a long rainbow three by Katerina Elhotova (10-8) midway through the first quarter.

The Czech Republic started to find their range from outside hitting shot after shot with Kulichová and Vitecková while France had to rely on free throws to stay in touch.

France started the second quarter at maximum speed and with Gruda scoring. With a trey by Emilie Gomis France were back on level terms within 52 seconds into the quarter.

France again struggled with perimeter shooting and despite winning most of the offensive rebounds were unable to put the ball in the basket.

The Czech Republic regained the advantage after Jana Veselá split a pair from the charity stripes. They then went 4 points clear after Elhotova hit her second trey of the game.

Céline Dumerc was playing at 100 km/h. Although a lay-up did not go in she pinched the ball off Veronika Bortelová and set up Gruda who scored.

The Czech Republic kept their cool and hit shots when they needed to while France missed everything during intense three minutes before the break.

Jennifer Digbeu connected for France with a shot from behind the arc to get things started after the break. But Petra Kulichová hit back almost immediately with 2 points from here favourite hunting ground, one meter from the basket.

Marion Laborde hit another French trey. But no matter what France did the Czech Republic replied quickly inside.

When Laborde hit a rainbow tree from down-town, she brought the teams levels (36-36). Yet on the next attack Elhotova hit a baseline trey to keep the lead with 4:39 to play.

France were forced to change tactics as Elhotova scored again and also played on the fast breaks more collectively.

Yacoubou-Dehoui found herself trapped in the paint but managed to feed Gruda for her 18th point of the game.

Digbeu then hit a big three right in line with the basket for France to briefly take the lead.

Vitecková brought the teams back together with a baseline jumper (43-43) with 90 seconds remaining in the quarter.

When Vitecková picked up her 4th personal foul right at the start of the final quarter, it allowed France to regain the lead through a pair of free throws by Yacoubou-Dehoui.

France extended the advantage with 2 more points by Gruda. However with 6:27 the teams were tied for the tenth time as Katerina Bartonova took advantage of a French miss with an uncontested lay-up after Kulichová picked up the defensive rebound and passed the ball to her.

Gruda and Yacoubou continued to work inside for France. The pendulum swung again with France edging in front (51-47) with four minutes to play.

France continued to dominate. Dumerc fired in a three-ball. It was the turn of the Czech Republic to miss their shots while Gruda hit a long two for her side to advance (56-47).

Lubor Blažek had no choice but to call a time-out for the Czech Republic with 2:41 to play.

The Czech Republic pulled off some big shots in the last couple of minutes but France kept a cool head from the free-thrown line to finish on top (63-56).

Lawson-Wade now has a full EuroBasket Women medal collection with a Gold and Silver medal to which she adds the Bronze.