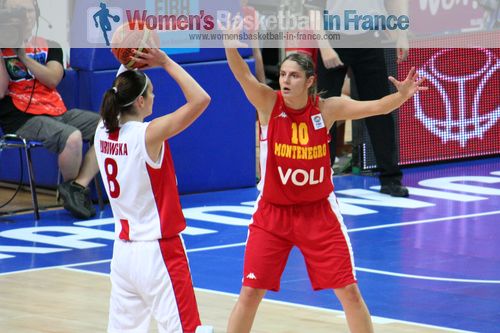 Montenegro have won their first ever game in the final phase of EuroBasket Women by beating the hosts. Anna De Forge led the scoring with 18 points while Iva Perovanovic finished with 17 points and 8 rebounds. It was a miserable night for the hosts who never got going with only Agnieszka Szott in double digits with 11 points.

Montenegro were first on the score sheet with just seven seconds played with Perovanovic getting inside the paint for an easy score.

The Polish fans had to wait for just over a minute to cheer Justyna Zurowska getting on the scoreboard.

The two teams traded basket for basket until the eighth minute with the hosts leading (13-12).

Montenegro put the first run together with 6 straight points. They were looking to finish on a flourish but it was Poland through Agnieszka Skobel who finished best in running down the clock. She picked up an offensive rebound and managed to put the ball overhead into the basket all on the buzzer.

Poland levelled the score with the first 3 points of the second quarter (18-18). This was the last time the teams were tied. Montenegro, playing better collectively, put two runs together to open a double-digit lead going into the break (37-26) with former LFB players Perovanovic (Montpellier) and Jelena Dubljevic (Tarbes) (above in picture) scoring.

The guests went into the second quarter leading (18-15). However a three-ball by Malgorzata Babicka had the teams level once again. Dubljevic and Perovanovic were leading the way with 9 and 8 points each.

The home fans were hoping for some fireworks and urgency from their players. Instead they had to watch Montenegro maintain their advantage for the first seven minutes of this quarter (33-43). 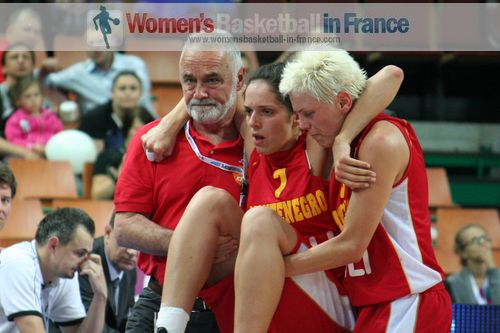 A couple of mistakes by the guests gifted Poland a couple of free baskets. But a trey by Forge put Montenegro back in charge.

Poland started to become careless and gave Montenegro three trips to the charity stripes which resulted in 6 points and a (54-38) advantage.

The game fizzled out as a contest early in the final quarter. Ana Baletic (in picture) from Montenegro fell during a scramble and had to be carried off the court.

Montenegro ran out winners against the hosts Poland (70-53).

France showed no mercy to Croatia as they cruised to victory (86-40) to start their defence of the EuroBasket Women title.

They made Croatia work hard for any points as Sandrine Gruda and Isabelle Yacoubo-Dehoui (left in picture) combined for 5 blocks. France also pulled down 54 rebounds of which 39 were on the defensive end.

All French players got on the score sheet with nobody playing for more than 20 minutes.

France were quickly into their stride with 9 points within the first two minutes. Sandrine Gruda hit the first 4 points.

Céline Dumerc then fired in a trey while Emilie Gomis completed the riot with a drive to the basket.

Although Croatia managed to slow France down a little Clémence Beikes made it (11-0) for France.

Croatia finally got off the mark with Mina Mazic splitting a pair of free throws.

Croatia was having no luck at all whereas France extended their advantage (14-1) midway through the first quarter.

France continued their one-team show and had a maximum lead (21-3) before Croatia scored their first points from open play by Iva Ciglar hitting a trey with just under eight minutes played.

Croatia’s only solution for the rest of the quarter was to shoot from far. They had some success as they trailed by just 10 points at the end of the first quarter (16-26).

It was one way traffic with France dominating all sectors of the game to go into the locker leading (48-25) with 11 players on the score sheet.

The only points from open play for Croatia came from behind the arc with Sandra Mandir and Ciglar connecting.

Nothing changed after the interval with France going (71-35) into the final quarter. Yet Yacoubou-Dehoui blocked hard to prevent a score at the end of the third quarter.

Nothing of importance happened in the fourth quarter with France winning (86-40).