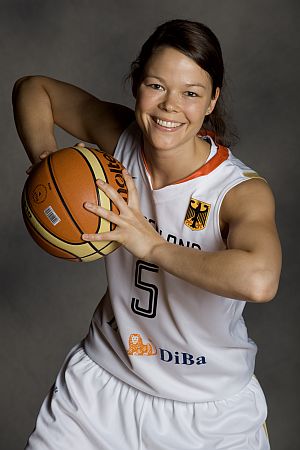 Germany went to the top of Group B after beating the hosts Italy (78-57).

Anne Breitreiner (left) was on fire and finished with 31 points while Romy Bär chipped in 21 points and added 8 more rebounds to her count.

Italy were never able to settle and they found themselves on the receiving end of a 10-2 run by their guests to trail (11-19) with just over six minutes played.

The Italians managed to reduce the deficit to a single point (21-22) by the end of the first quarter.

Italy briefly edged in front at the start of the second quarter. But once Breitreiner levelled the score (26-26) midway through the quarter, Italy were already beaten.

Germany took full advantage scoring 14 unanswered points including back to back treys from Breitreiner as they took control of the match for good.

Italy were unable to stop Breitreiner and Bär as they fell further behind.

Germany went into the final quarter leading by 15 points and finished winning by 21 points.

This victory put Germany on top of EuroBasket Women AQT Group B.

Anybody can win EuroBasket Women AQT Group B

The Additional Qualification Tournament in Taranto is wide open because all the teams have dropped at least one game during the first three days. At the moment Germany with two victories are on top of the group.

Results from day 1 to day 3