Finland held their nerve when it mattered most

The Finnish Wolves survived a nail-biting ending by Bulgaria to record a victory against Bulgaria (61-57). 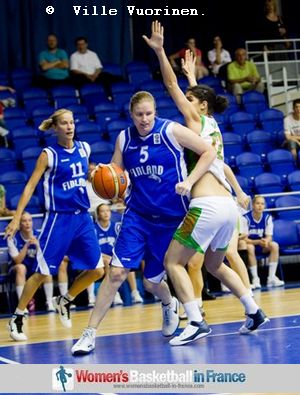 Finland had a maximum advantage of 8 points (52-44) with seven minutes left to play.

Bulgaria started to chip away at the deficit. With just over a minute to play they just trailed by 3 points (57-60).

The last minute was scrappy and a little uncontrolled. Bulgaria did not execute their last play properly and Doneeka Lewis (née Doneeka Hodges) was left no option but to fire a wild three-point attempt as the clock was winding down.

Her shot was off target and Heta Korpivaara from Finland was fouled in the struggle for the rebound.

Serbia did the damage in 10 minutes

Serbia had a great first quarter which included an 11-0 run that resulted in a (32-14) advantage.

Serbia took their foot off the gas but still had a comfortable lead at half time (53-31).

Romania played better in the second half of the match. Yet it was far too late to trouble Serbia. Jelena Milovanovic (right) compiled a double double of 18 points and 10 rebounds as Serbia won the game (77-64).