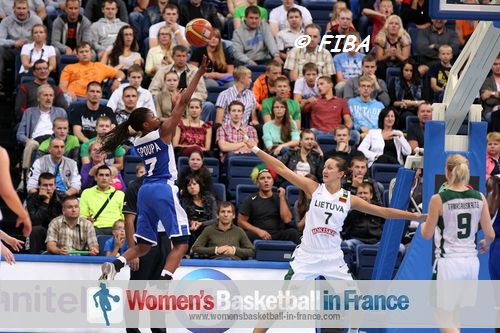 Since the change of format in 2007 of the FIBA U19 World Championships, the quarter-finals have become the most stressful day in the competition for coaches.

All the results from the group stages are thrown into the archives and a new competition starts with the winners advancing and losers eliminated.

In 2009 Australia were the most dominating team going into the quarter-finals with a 6-0 record. Yet Canada ended their dreams with a single-point victory.

In 2011, Canada were the only team to get through the group stages unscratched and yet bowed out to Spain (55-69).

The quarter-finals is also known as the boaster rounds. In 2007 Sweden became the surprise package by making all the way to the final and winning Silver. In 2009 Argentina came up strong and finished with bronze.

In 2011, Spain were almost eliminated and finished 4th in their group with a 3-3 record, yet made it all the way to the final after beating Australia (55-49) in the semi-final.

Canada have never beaten Spain at the U19 World Championship but there is a first time for everything. Despite a record of 3-3 in this championship Canada were the first team to stop the USA from reaching the 100-point mark.

The Canadians are a little taller than Spain and are led by Jamie Weisner who is having an excellent tournament.

Although Spain are undefeated so far in this competition, they have struggled when Astou Ndour and Belan Arrojo are not firing on all cylinders.

This game has all the ingredients to be a tight game. Spain are the youth basketball Queens of Europe but finished 5th during the 2012 U18 European Championship, while Canada are trying to write a new page in their history book.

On paper France look better than Brazil because of a narrow loss to the USA in the last group game. However Brazil have a speedy shooting guard in Isabela Ramona who can turn a game on the spin of a coin.

For France Olivia Epoupa and Valériane Ayayi will need to be on top of their game while Aby Gaye needs to take care of the ball in the paint.

France and Brazil play a similar style of basketball which should be interesting for the neutral specators. France have won their last four World Championship games against Brazil but have been eliminated at the quarter-final stage in their last two appearances.

Brazil on the other hand won the bronze medal in 2011.

Australia have had their upsets in quarter-final plays before. So it should be interesting to see how Carley Mijovic, Casey Samuels and Alex Wilson handle the pressure. The Gems are a very athletic team and more fun to watch because of their flair.

China have an interesting height advantage over their opponents and also have a disciplined approach that can frustrate more mobile opponents.

Meng Li who was one of the stars of the U17 World Championship in 2010 is definitely a player to watch and could be the x factor in this match up.  The Chinese pair of Liwei Yang and Hengyu Yank are strong and steady.

Japan can run faster than probably any team in this championship. But can that be enough to beat the USA?

The answer is no. In order for Japan to pull of the shock of the tournament they are going to have to play the best defensive game of their live. Not withstanding Miyuki Kawamura and Manami Fujiokaare should be interesting to watch.

The USA are stronger in all areas of the game but have shown a little weakness when being pressed. Breanna Stewart, Morgan Tuck and Alexis Jones will need to remain calm and collected to make sure that they do not buckle under the pressure.

Over the years, when it comes to the knock-out stage we tend to see the best of USA basketball. The only name on the winners' list since 2005 is the USA.