Tayla Roberts was not ready to lose to Japan again

During the 2010 U17 FIBA World Championship for Women in France, Japan beat Australia (95-92) in the classification group for 5th - 9th place. Tayla Roberts (left) played 12 minutes in that game and scored 8 points which included a perfect 4-from-4 from the free-throw line. Her team-mate Gretel Tippet scored 34 points and pulled down 16 rebounds in that defeat.

A little over a year later, this time in the quarter-final match Australia and Japan produce another international youth basketball classic. This time Roberts was able to step out of the shadow of Tippet scoring 41 points and collecting 17 rebounds in the victory (92-83). Tippets who played 25 minutes had to settle for 8 points this time around.

Japan are small but quick and excellent three-point shooters and they gave Australia a hard game from the tip-off. They were still on level terms with nine minutes played (15-15).

However Australia finished the quarter with a 6-0 run started with Roberts' 11th point of the quarter and concluded by back to back scores from Sara Blicavs and Nadeen Payne.

Shiori Takada and Rui Machida from Japan started the Japanese long distance shooting festival in the second quarter as Japan clawed their way back into the match to lead (27-26) midway through the quarter.

Japan continued attacking and with Aoi Katsura joining in the long range shooting festival they pushed their lead up to 5 points (37-22) with two minutes to play.

The Gems weathered the storm and found a second breath of wind and with Rebecca Allen, Tippets, Aimee Clydesdale and Roberts all scoring. Australia trailed by just a single point at the interval (40-41).

The third quarter was all about international youth basketball at its best. Both sides engaged in an offensive festival which finished in favour of Australia 32-26 to give them (72-67) going into the final quarter.

Japan who played the game with six players started to tire while Australia who played with eight players had more in reserve and used it to their advantage.

Roberts got things started for Australia in the final quarter as they stretched their lead to 13 points (80-67) with 33 minutes played.

Australia maintained a double digit lead until the 36th minute when Takada fired in a shot from the land of many (82-75). However Tippet's frequent trips to the free-throw line kept Japan at bay.

Roberts was to have the honour to score the last 4 points.

Japan went 15-of-37 from beyond the arc and a perfect 6-of-6 from the free-throw line but conceded 66 points in the paint while just scoring 28 themselves.

Takada and Machida scored 23 and 22 points while Katsura and Sanae Motokawa had 14 and 12 points each.

Japan have coped without the injured Aya Watanabe. But it was always always going to be difficult to beat Australia playing at the tempo imposed with a six-player rotation.

For Tippets, Kerryn Harrington and Ashleigh Karaitiana this victory makes up for the quarter-final loss to Canada in 2009.

Rebecca Cole finished with 17 points and 6 assists while Payne was the other Gem in double digits.

Canada came into the U19 FIBA World Championship quarter-final with a perfect record which included a victory against the USA. Spain on the other hand had won three and lost three matches on their way to the knock-out phase.

Astou Ndour (left) became the hero of Spain with her 19 points, 8 rebounds but most importantly her 4 blocks.

Spain got off to the best possible start scoring the first 6 points of the game.

Canada struggled to break the Spanish press. Despite a big three by Diana Lee and some excellent work by Wumi Agunbiade, it was Spain with back to back baskets by Ndour that held the advantage (17-10) at the end of the first quarter.

The second quarter was a tight affair. However two three-pointers by Maria Espana and one by Elena Diaz neutralised the Canadian comeback and gave the Spanish team a double-digit advantage. Yet Canada reduced the deficit slightly at the interval (26-35).

Queralt Casas and Mariona Ortiz stepped up after the break and put Spain into the driving seat for the rest of the game. Michelle Plouffe did everything she could for Canada but Ndour and Laura Gil were around to block them.

Ndour even blocked a three-pointer by Lee while Gil pushed the Spanish advantage up to 13 points. Spain had to settle for an 11-point lead going into the final quarter (50-39).

Canada could not get anything going from outside and were physically dominated in the paint. They just did not have enough energy to trouble Spain.

With the contest over in the closing minutes, the bench players from both teams finished the game.

Ortiz and Casas also finished in double digits for Spain with 14 and 10 points each while Nirra Fields and Michelle Plouffe led Canada with 14 and 12 points.

Canada just had one of those days when the ball would not drop and only managed to keep the game close from the free-throw line in which they hit 20-from-28.

Spain, the only European nation left in the race and 2009 U19 silver medalist face Australia next.

So close and yet so far for France

Adja Konteh and Valériane Ayayi combined for a total of 22 points as France went into the locker room leading (30-25) scoring 11 points each.

Although France had the better of the first half after opening with a (23-11) first quarter, they struggled to get anything going inside and depended on long distance shooting.

After the break the USA changed defensive systems and in less than 60 seconds were in front (31-30) thanks to Ariel Massengale.

Although the pendulum swung slowly in favour of the USA with Breanna Stewart (left) doing the damage, France managed to stay in front with a couple of amazing three-point shots from Ayayi (38-33) with almost 24 minutes played.

Konteh's foul problems did not stop Hélèna Akmouche from adding another three ball to her three-point tally as France fought tooth and nail to stay in front (47-41).

However the last three minutes belonged to the USA with Kaleena Lewis and Stefanie Dolson throwing themselves into the contest to bring the teams level (47-47).

France were able to go into the final quarter leading (49-47) thanks to a pair of free throws by Jenny Fouasseau. But the defensive play of the quarter came on the buzzer as Akmouche's three-point attempt was blocked by Stewart.

Lewis and Stewart went on the offensive at the start of the final quarter sharing 13 points in a 15-2 run that gave the USA a double-digit lead (62-51) with six minutes to play.

An additional bonus for the USA was that Konteh had also fouled out of the game. However France did not give up and responded with back to back treys by Akmouche and Fouasseau.

When Akmouche scored again, this time just 2 points, she made it a 3-point game with four minutes to play.

An unsportmanlike foul against Massengale allowed France to reduce the deficit once more (60-62) after Agathe Degorces split a pair and complete a 9-0 run.

Steward brought an end to the French run but the two sides were back on level terms (64-64) with just over two minutes to play after Clarince Djaldi-Tabdi and Akmouche scored.

With a minute to play when Stewart drove to the lane she managed to draw a foul and then calmly hit her free throws. The USA then went on a press forcing Degorces into turning the ball over.

The USA worked the next attack and when Lewis drove to the lane, the French players decided not to foul and Lewis went on to score.

France were left with little option but to shoot the ball from anywhere. Yet they missed on both occasions and with the game practically over Massengale was fouled.

Konteh did not score again in the second half and finished with 11 points while Fouasseau had 10.

France meet Russia in the FIBA classification round for for fifth place.

Brazil hold on to beat Russia

Damaris Dantas (left) has been the driving force for the Brazilian side.

Yet it was thanks to Isabela Ramona who scored with a driving lay-up her team's last basket from open play with about 18 seconds to play (71-68) that more or less secured Brazil's victory. Dantas did have the last say as she split a pair of free throws at the end of the game for a (73-71) victory.

The match itself was exciting and at times explosive. Brazil had the better start going in front (22-13) after the first quarter. Russia came storming back during the second quarter and trailed by just 2 points with 90 seconds remaining in the half.

However 5 points by Dantas and 2 points by Aruzha Michaski enabled the South Americans to go into the locker room leading (41-32).

The Russians went to work offensively during the third quarter with Anastasia Maximova working inside and the distance shooting by Alexandra Stolyar (right).

Russia's hard work appeared to have paid off when they went in front with 20 seconds left to play in the quarter through Anastasia Pasynkova.

However they made one error by allowing Dantas to hit a buzzer-beater corner trey for Brazil to take a 2-point advantage going into the final quarter (54-52).

The last quarter was tough physically and emotionally as the match came to its climax.

Russia might have felt that the officials messed up the 24-second shot violation rule that resulted in their basket being cancelled to level the game as the match was going to the wire.

Russia shot the ball well all through the game hitting 10 three-pointers. However they went 5-of-10 from the free-throw line and committed 16 turnovers.

Brazil did not shoot the ball well but scored 36 points in the paint. They also went 20-of-41 from the free-throw line which in the end proved to be the difference between the teams.

For Brazil Dantas scored 23 points and picked up 17 rebounds while Ramona and Tassia Carcavalli scored 13 and 12 points each.

For Russia Stolyar led the way for Russia with 21 points and was joined in double digits by Svetlana Efimova (5 assists) and Ksenia Tikhonenko (12 rebounds) with 12 and 10 points each. Yulia Polyanova picked up 17 rebounds including 11 on the defensive end but only scored 7 points.

Russia finished fifth during the 2010 U18 FIBA European Championship and meet France in the classification game. 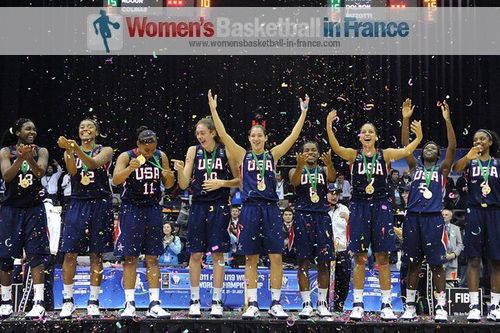