Arnaud Guppillotte has added a second U18 youth basketball evaluation training camp to his programme. Out of the 16 players called up in February, eight have been asked to return alongside eight new players.

The camp is for five days between 25-30 March 2013 in Paris, at INSEP. Most of the new players called up this time come from the CFBB.

However the addition of Victoria Majekodunmi (Charleville-Mézières) and Sarah Martineu (Roche Vendée) to the group has caused excitement in their respective clubs. 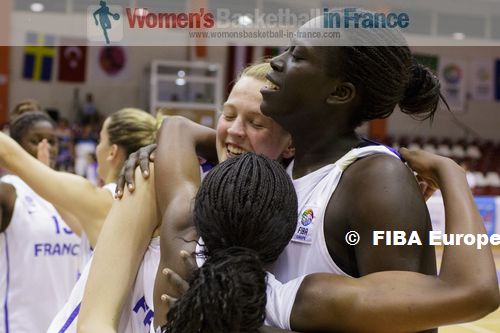 Unless another training camp is added before the preparations start for the U18 European Championship, Guppillotte will - at the end of this camp - make up his final training list.

Elise Fagnez, Aby Gaye (in picture) and Marie Mané are the only players at this camp that had played for France U18 last summer.

The list of players called up /  Liste des joueuses convoquées :

12 February 2013: Youth basketball preparation for France U18 starts in Bourges