The U20 Division B international youth basketball tournament in Albena is this summer the only European Championship in which every game counts towards the final placing.

With just nine teams participating, all the teams must play each other once in a round robin league format and therefore the counter starts on day 1.

Before this tournament had started everybody knew about the qualities of Monika Satoranská from the Czech Republic and she did not disappoint in the opening game.

She finished with 14 points and 15 rebounds to help the Czech Republic beat Latvia (67-59).

Latvia put themselves in a difficult position with their captain Guna Lagzdina fouling out during the third quarter. Lagzdina is the most experienced player in the squad.

However the turning point of the game came with just over two minutes into the final quarter with Latvia trailing by just 2 points (48-50). Two key players Paula Tomsone and Asnate Fomina picked up their 4th foul in back to back calls.

The risk of keeping Fomina on the court failed. She fouled out  less than 60 seconds after picking up her 4th foul.

The Czech Republic took full advantage of their opponents' lack of experience and scored 8 unanswered points before pacing themselves to victory. 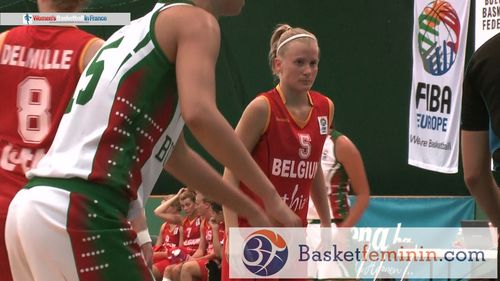 Julie Vanloo (in picture) needed to be on top of her game with Belgium just holding off the hosts Bulgaria (70-67). She finished the match with 19 points, 6 assists and 4 steals.

Belgium led by 20 points (52-32) with 27 minutes played and appeared to have weathered the storm.

However Bulgaria have two giants Hristina Tyutyundzhieva  (1m90) and Gabriela Kostova (1m92) who finally started to make their presence felt. In addition Iva Kostova (18 points) started to shoot the lights out.

Belgium's lack of preparation for this youth basketball tournament started to show as the turnovers clocked up. Yet they had just enough points in the bank to hold on to the victory. 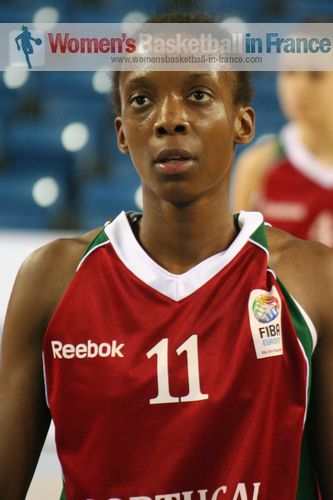 Portugal did not get out of second gear in their victory against Israel (66-38) which was the only walk-over of the day. Joana Jesus and Jessica Almeida (in picture), two of the most experienced youth basketball players on the Portuguese roster, led the team with 16 and 11 points each.

Sapir Tirosh was the top scorer in the game with 17 points for Israel.

In the last game of the day Macedonia beat Great Britain (60-57) with the very last shot of the day. Ivona Pejkovska hit the game winning shot, a three-pointer, after being left open for just a split second as the buzzer went off.

Pejkovska spent the first three quarters on the bench and only played in the last nine minutes of the game.

For Great Britain it was just one of those nights. They won the rebound battle, had less turnovers but just could not finish. They took 32 more shots than their opponents and left a 12 points at the free-throw line.

Macedonia were just as wasteful from the free-throw line hitting just 20-from-39. But their more economical finishing was more than enough for the victory.