The USA have qualified for their 5th consecutive U19 World Championship for Women final. They beat the 1993 champions Australia (77-54) in the second semi-final in Klaipeda.

They will face France in the gold medal game, while Spain and Australia have to settle for the bronze medal game.

France ended Spain's dreams of a third consecutive final (62-58) in the first semi-final.

This defeat for Spain leaves the USA as the only team in the competition not to have suffered a loss.

In the second quarter-final Australia gave the impression that they were going to take the USA to the wire leading (14-11) after the first quarter. 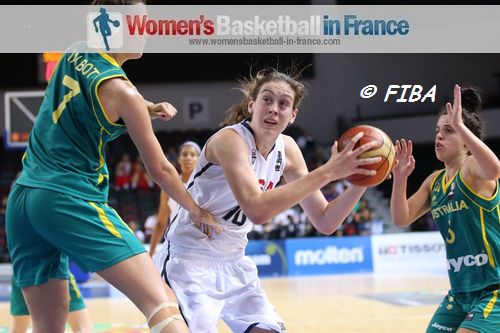 The game remained tight up to the 14th minute with Australia still holding the advantage (20-17).

The Americans and in particular Breanna Stewart (in picture with ball) then went on the war path and finished the first half with a 21-0 run that brought the contest to an abrupt end (38-20).

The last 20 minutes turned into a USA master class in the art of defending a lead.

Australia were a shadow of themselves and despite trying hard were never going to overturn the first-half deficit.

For the USA all 12 players got on the scoresheet with Steward being the only player in double digits with 23 points in the (77-54) victory.  For Australia StephanieTalbot was the top scorer with 11 points.


The rest of the news from day 8

Brazil saw a 24-point lead shrink to 3 with a minute left to play. But Canada's luck ended when Isabella Ramona (26 points) knocked in the last 4 points of the game for Brazil to win (70-63).

Brazil will contest the fifth place match against China who walloped Japan (70-49).

Russia ended their competition by winning the 9th place game against the Netherlands (83-80) while Serbia had an easy finish to claim 11th place with a walkover against Lithuania (84-36).