2013 U18 European Championship
Belgium and Poland back to Division A

The semi-final day still has a special feeling at B division European Championship tournaments. There was electricity in the air in Miskolc with Belgium and Poland coming on top to book their place in the final while punching their tickets for Division A basketball in 2014.

Poland waited until the second half of their semi-final match against Latvia to take control. Angelika Stankiewicz was steady in the paint and almost perfect from the free-throw line (9-of-10) while knocking down 25 points for Poland.

Amalia Rembiszewska and Weronika Telenga added 12 and 11 points each. Latvia had no problems hitting their three-pointers (7-from-17) but their finishing in the paint was poor. They also allowed Poland too many trips to the charity stripes.

It is mission accomplished for Arvid Diels (in picture) for Belgium with their semi-final victory. 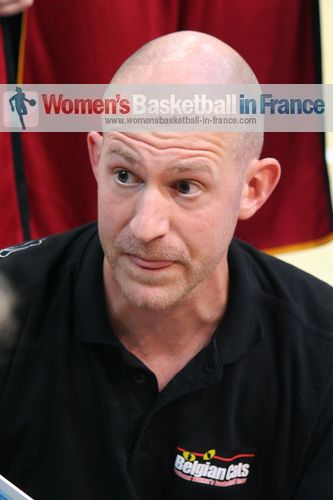 This is the second time that Diels takes Belgium into the final of a U18 Division B tournament. In Macedonia 2008 Belgium finished second to Latvia, so he should be looking for a winners' medal this time.

Belgium did not tremble against Lithuania and were well on their way with a 10-0 run to lead (10-2) after four minutes.

Until half time Belgium were playing basketball at another level with many players contributing.

Lithuania who had lost Dalia Belickaite early in the game were a shadow of themselves as they limped into the locker room trailing (22-44).

Belgium's offensive dried up during the second half but their defending was excellent. The final score (69-42) gave a true reflection of Belgium's dominance.

For Lithuania, Laura Juskaite was the only player in double digits with 16 points.

In the remaining two games for the 5th - 8th place classification places Bosnia and Herzegovina and Ukraine will now compete for fifth place after victories against Bulgaria and Hungary respectively.

Andela Delic led Bosnia and Herzegovina in style with 31 points and 9 steals in her side's (76-66) success. Borislava Hristova poured in 35 points in defeat to win the scoring award for this game.

Vita Gorbets was also on fire, accumulating 31 points for Ukraine in a (71-61) victory over Hungary. Laura Szorenyi was one of the few players not to misfire with 9 points for Hungary.

In the lower classification games played on day 8 there was no real surprises. Noémie Rouault helped herself to another double-double performance of 31 points and 14 rebounds as Germany wacked Scotland (78-53). Ama Degbeon  contributed  24 points for Germany in a match that counted for nothing to both sides.

The European Championship for Women Division B final pairings for the the lower classification games are as follows: