While all the basketball news outlets in France are still glowing over the performance of France in the Olympic Games, ﻿﻿﻿Allison Vernerey﻿﻿ ﻿and the Blue Devils from Duke University have rolled into town.

They will be in France for one week before concluding the European tour with a couple of days in Italy.

The tour starts in Paris with a game against BC Franconville. The second leg of the tour, on the 17 August, sees them off to Mondeville, a regular host to NCAA Division 1 programmes.

The final part of the French trip sees the team travelling down to Vernerey's home in the Haut Rhin close to Mulhouse.

For Coach P the visit to Allison's home with the team is something she has been looking forward to since she recruited her.

Duke will then face a number of Vernerey's team-mates from the Alsace Region team of the 90-91 generation when they travel to Geispolsheim (close to Strasbourg) for their final game on the 19 August.

The teams will move on to Cernobbio, Italy for the last part of the trip.

All 13 players on the roster for the 2012-2013 season will be in France. But only eight players will be playing: Vernerey, Chelsea Gray, Haley Peters, Tricia Liston, Ka’lia Johnson and Jenna Frush along with freshmen Alexis Jones and Sierra Moore. The other players Chloe Wells, Richa Jackson, Elizabeth Williams, Amber Henson, Katie Heckman are recovering from injuries. 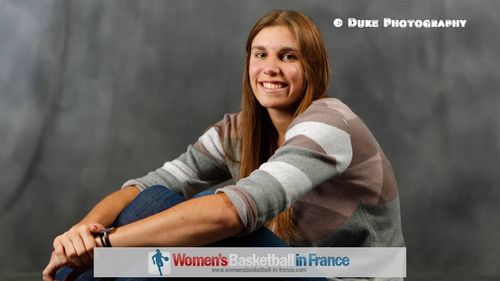 Vernerey has participated in 105 official games for the Blue Devils and has had two conference titles and three trips to the NCAA Final 8 in her basketball book. She was also called up to the French national team in 2010 with the 2012 Olympics in mind.

However it is off the basketball court that Vernerey is making a name for herself on the other side of he Atlantc﻿ with her Cancer Research Projects. She has organised several events including a sponsored run to raise money for this project.

During the March Madness she was interviewed on one of the big sports radio services about her project.

Vernerey who is majoring in Economics is also proving to be a winner in the class room with two distinctions: she is a three-time All-ACC Academic Team selection and a two-time Capital One Academic All-District III selection.