Belgium's 1993 generation of basketball players are amongst the best in Europe. At the moment they are the leading team at the 2013 European Championship for Women Division B.

Julie Vanloo and Hanne Mestdagh are flying high at the moment, both scoring 22 points in Belgium's victory against Latvia. Yet it is the team's collective effort down the stretch that is drawing admiration from media outlets covering this championship.

Bulgaria may have the pressure of hosting the competition. But it has not stopped Borislava Hristova, who only turns 17 after the tournament, to make local headlines.

Without Portugal playing on day 3, it was left to the Czech Republic to provide the entertainment with long distance shooting. They went 12-of-28 in their comfortable victory against Great Britain.

In the first game of the day between Latvia and Belgium, it was Latvia playing the better team basketball for 36 minutes.

However Latvia could not contain the duo of Julie Vanloo and Hanne Mestdagh. Between them they were an impressive (10-of-16) from behind the arc, whereas the Latvian players shared the scoring with seven players scoring 8 or more points.

Belgium were finally able to break their opponents during the final four minutes with big shots and mature decisions to take the game (70-65).

Sabine Dukate from Latvia was the only other player in the match to reach double digits with 14 points. 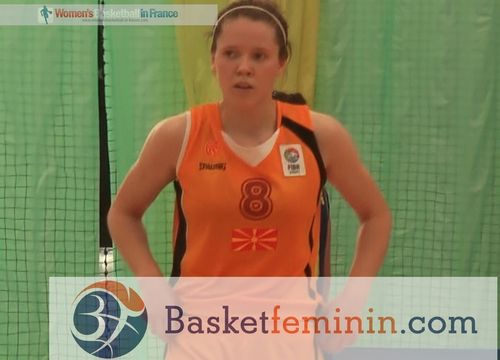 After a tight first quarter in which Macedonia just edged Romania (19-17), the pendulum swung permanently in favour of Macedonia.

They formula was simple, throw the ball inside the paint and score. By the interval the advantage reached double digits (41-29).

Romania huffed and puffed the rest of the way. Yet it was not to be as Macedonia notched up their second victory (72-54).

Aleksandra Stojanovska finished with a double-double of 19 points and 10 rebounds. Her team-mate Andzelika Mitrasinovik (in picture above) finished with the unconventional triple-double 17 points, 10 rebounds and 10 turnovers although also contributing 8 assists.

Romania like Latvia have lost their opening two games and need to start winning soon if they want to gain promotion.

Bulgaria's three-point shooting skills deserted them (0-from-10). So they went inside the paint and to the free-throw line to overcome Israel (69-57).

It was not a pretty game of basketball. Technically Bulgaria did nothing wrong. Borislava Hristova (in picture) helped herself to 19 points and 11 rebounds while Gabriela Kostova scored 15 points.

For Israel Sapir Tirosh was outstanding, hitting 6-of-8 from behind the arc for a game-high 24 points.

In the last game of day, the Czech Republic were in the "shooting-zone". They made their first 7 shoots and led Great Britain (29-9) by the end of the first quarter. In reality there was not much Great Britain could do because their own shots were not hitting the target.

The Czechs continued to hit shot after shot and Great Britain were blown away by half time (49-24).

The fighting spirit of Great Britain was not enough as the Czech Republic bounced back from their defeat against Belgium with a comfortable win (96-50).

One more defeat for Great Britain should more or less end their promotion ambitions for this year.