Hosting youth basketball events is never easy. But when the hosts have ambition of promotion then a defeat comes hard. In what can be described as a derby match, Bulgaria fell (60-64) against country neighbours Macedonia.

Macedonia, trailing by 7 points going into the final quarter, turned things around quickly with a 8-0 run to start the fourth quarter.

The lead changed hands several times before Macedonia went in front for good with a three-ball by Andzelika Mitrasinovik (20 points) with just under five minutes to play.

This victory brings Macedonia back into promotion race while for Bulgaria the hope of making the podium is practically over in the 2013 U20 European Championship for Women Division B. 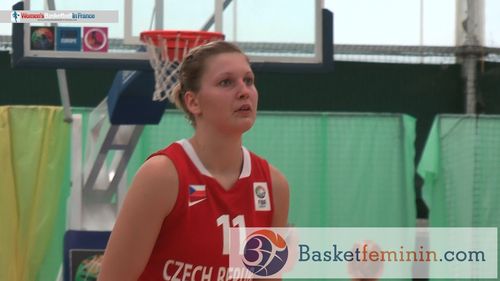 The hosts need to win their last two matches and hope that the Czech Republic, Belgium and Portugal do not win another match.

The Czech Republic are just one win away from securing promotion after handing Portugal their first defeat of the tournament (58-51).

The Czech Republic had beaten Portugal this year in a tournament in France and as a result were already used to their style of play.

The Czech Republic still needed a big performance from Monika Satoranska (in picture) who scored 16 points and pulled down 2 rebounds.

Belgium destroyed Israel in the first half (44-15) and paced themselves to victory (61-39).  However not all is well for Belgium with Jolien Goyvaert and Lynn Delvaux picking up injuries.

Latvia blew away Romania (93-53) with five players in double digits.

On day 6, Israel and Romania were officially eliminated from promotion battle. Latvia and Macedonia are back in the race but one of them is going to drop out when they meet each other in round 8.

However if the Czech Republic, Belgium and Portugal win their next match then the promotion race is over.