Eugenio Rodrigues's views on playing basketball is simple, never give up and fight till the end. With his team trailing by 7 points going into the final quarter, his players picked themselves up in an action packed final quarter.

Portugal sneaked past Macedonia (55-53) in their third basketball of this edition to remain unbeaten. In the match between the two teams looking for their first win it was Latvia that opened their account against Great Britain (67-51).

The Czech Republic and Bulgaria both finished up as comfortable winners on day 4 of the U20 European Championship for Women in Albena.

Belgium - who did not play - and Portugal are the only teams undefeated with three wins each. However the Czech Republic and Bulgaria are ahead of them in the current table because they have played an additional game.

It appears that the battle for the three places for promotion is between the top four teams. At the other end of the table, with four defeats Great Britain, although not mathematically eliminated, do not have much of a chance of making the top three.

What happened on day 4 in Albena Portugal kept their promotion ambitions alive with a hard fought victory against Macedonia (55-53). Jessica Almeida (in picture) was the leading scorer for Portugal with 17 points.

In a match that had 7 lead changes and 7 ties, it was Macedonia that appeared to have things in control going into the final quarter leading (42-35).

Portugal went into overdrive, scoring 13 points while keeping Macedonia scoreless to get the advantage back for good. However the game went down to the wire because Portugal missed a couple of free throws with two seconds to play.

Macedonia rushed down the court and Andzelika Mitrasinovik (12 points, 5 assists) fired off a three-point shot on the buzzer which failed to drop. Aleksandra Stojanovska was the leading scorer for Macedonia with 17 points in this strongly contested basketball game. 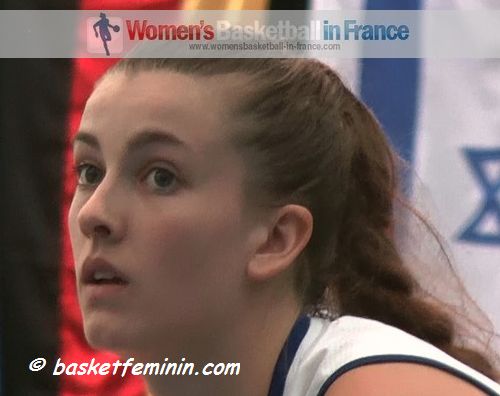 Latvia kept their hopes alive of sneaking a promotion place by knocking over Great Britain (67-51).

It was a balanced team effort that saw 11 players on the score sheet with Ilze Jakobsone and Kate Kreslina leading the way with 9 points each. Their capatain Guna Lagzdina took care of the rebounds with 14 while scoring 7 points.

Great Britain were in the game for the fist 16 minutes and led (24-22). They did not score for the rest of the second quarter, only for Latvia to score 15 unanswered points until the third quarter.

Trailing (24-37) the game just slipped away from them. Rosie Hynes led the team in scoring with 9 points.

In the previous match Bulgaria missed their first 10 shots from the three-point line. Yet this did not put them off as they knocked down 13-from-33 in their comfortable victory against Romania (74-54). Kristina Peychinova from Bulgaria led all scorers with 20 points.