It was another day of exciting basketball in Samsun at the 2013 U20 European Championship for Women Division A. Turkey suffered their first defeat, France and Spain remain undefeated and Germany are eliminated.

The old basketball saying that free throws win games comes true with France edging out Sweden (59-58) with a couple of free throws in the dying seconds.

In Group E, Spain booked their quarter-final place with a comfortable victory against Serbia (71-46). Greece also won in a cliff hanger (64-62) against Belarus to keep their qualification chances alive while the Slovak Republic beat the Netherlands (62-47).

In the two exhibition games Ukraine recorded their first win in Samsun by beating Hungary (72-53) while Poland eased past Lithuania (58-51). 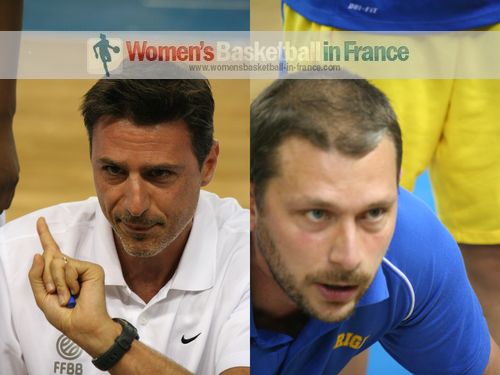 France and Sweden produced the type of match one likes to see at youth championships: a lot of passion, coaches scratching their heads, drama and good basketball. While Sweden were fighting for a place in the quarter-finals, France were playing for pride.

France hit Sweden 15-0 to lead (17-2) after six minutes of play. But three minutes into the second quarter Sweden had overtaken France (24-23).

The rest of the game was a battle of nerves. France worked well in the paint while Sweden knocked down three-pointer after three-pointer.

With 30 seconds to play Josefin Vesterberg from Sweden hit a big three-pointer that gave her side the advantage (58-57). 12 seconds later Margaux Galliou-Loko successfully converted 2 free throws for France.

Sweden had one last go to win the match but the ball refused to drop and France escaped from defeat.

Francesca Dotto spent her time hustling Olcay Cakir who finished up with 11 turnovers.

Russia are at their best when under pressure. Adefeat against Germany would have seen them eliminated and playing the rest of the competition in 9th - 16th classification games.

Russia led against Germany (9-1) after three minutes and stayed in front the rest of the way for a comfortable win (80-51). Germany are out while Russia must beat Sweden in the final game to advance to the quarter-finals. 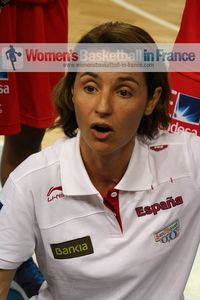 For Anna Caula Paretas (in picture), the coach from Spain, everything is going according to plan with five wins from five games and first place in the group assured.

With Spain leading against Serbia (44-17) at half time, she was able to give all players valuable playing time. Spain won the match (71-46) with Inmaculada Zanoguera, Yurena Diaz and Paula Estebas scoring 14, 13 and 10 points respectively. Aleksandra Stanacev and Jelena Stankovic scored 8 points apiece for Serbia.

Greece are the comeback queen's in Samsun. Tey were behind Belarus for most of the game, trailed by as many as 13 points and yet ended up winning (64-62). A baseline three-poiinter by Anthoula Chatzigiakoumi with about six seconds to play was all that Greece needed to win the match.

The Slovak Republic put a big dent into the qualification aspiration of the Netherlands by beating them (62-47).

The Netherlands had a bad start which was made worse with the foul problems for Maxime Essenstam. The Slovak Republic rode their luck to open up a 14-point lead early in the second quarter.

However the Slovak Republic, needing the victory to stay in the competition, went on a 12-0 run of their own during the final quarter to settle the contest.

For the Netherlands Gabrielle Van Den Bosch and Maxime Essenstam finished with 14 and 13 points each.