What women basketball players need to know about French basketball 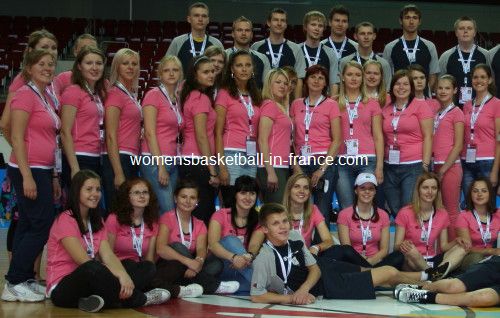 In 2007 the number of women basketball players above the age of 18 registered by the French Federation for Basketball (FFBB) was 44774.

However there are more than 180,000 females in France with licenses. This number includes all the players from baby basket to the senior category, administrators as well as coaches.

The former basketball pyramid structure for professional and amateur basketball is changed starting from the season 2010-2011.

NF2 and NF3 is replaced by a new structure: CF1, CF2, and CF3. Therefore starting from September 2010, there are five divisions of national basketball.

The big change for non French players - hoping to come and play in France for the first time in the lower divisions - is that they no longer have to arrive in France by 31 December the season before they want to play.

However only one non-French player in CF1, CF2, CF3 per team and per match is allowed.

The youth structure is also changing the formalisation of the category "Espoir" (from junior to U20).

You can read more about the reforms for women playing basketball in France here:


Is Ligue féminine 2 any different to NF1?

The second division for women playing basketball in France has become semi-professional and the clubs are required to have 4 French players under the age of 23 on the team sheet for each game.

This is the major modification. The new label recognises that the division has become semi-professional. Most of the teams have signed professional players for the coming season.

The other change is that LF2 teams must have a youth academy structure that follows guidelines proposed by the French Basketball Federation.

Each team is still allowed to have 2 foreign players on the team sheet.

In the documentation released in March 2010, the third division was to become CF1. But on the fixture lists for the 2011 season the title NF1 is used (although not to be mistaken with the former NF1 which is division 2 or LF2 from this season).

This division consists of 2 groups (A and B) of 12 teams.

At the end of the regular season the top 3 teams from each group qualify for the promotion round.

The teams from each group carry forward the points earned from the regular season against each other before facing the teams from the other group on a home and away format.

Return to women basketball players index the top of page

The fourth division is called NF2 (CF2 in the French basketball reform) and has 4 groups of 12 teams which includes no more than 3 Espoir teams per group.

The major difference is that 12 teams from the LFB have their second team (Espoir) playing in the same division.

The promotion and relegation rules for the LFB Espoir are not clear at the moment because Bourges Basket Espoir is playing in NF1. This is a new development since the initial blue print.

The plan is that at the end of the regular season the top 3 non-Espoir teams from each group qualify for an end-of-season play-off that ends in a final four to determine the champions for the division.

The Espoir teams also have an end-of-season championship for the best 6 teams at the end of the regular season.

The fifth division NF3 (CF3) is also divided into 8 groups of 14 teams.

The Espoir which was a title used by the clubs in the LFB for players in the basketball academy formally becomes in 2010 a U20 age group at the national level for players between the age of 17 and 20.

Return to women basketball players index the top of page

GO Back to top of women basketball players information page