Emese Hof (in video) who is an experienced youth international at this level showed her younger team-mates what to do as the Netherlands took control of the game with a (19-9) first-quarter lead.

Stach kept Germany in the game until the break with her trade mark tear drop shot from the baseline (21-35).

The Netherlands had no luck from the land of many but their half-court press and clever running off the ball enabled them to pull away for good in the second half and win the game (64-38).

Emese Hof explained in our video after the game what this victory moaned to them in terms of their FIBA Europe Division A status. 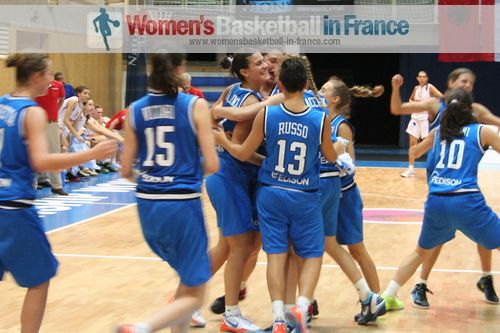 Italy start FIBA Europe U16 European championship with a bank

When it comes to youth international basketball at its best then the match between Italy and Spain was a good advertisement.

There were some excellent moments and then at times it was clear that it was U16 girls playing basketball.

The game was won by Italy in the first five minutes (12-5) because from that moment Spain were always on the back foot.

Spain chased well and were unlucky to not only trail by 2 points at the end of the fist quarter after their buzzer beater was disallowed (12-16).

During the second and third quarter Spain used a lot of energy to catch up with the Italians as they had pulled themselves together. They matched Italy basket for basket and even led briefly.

However Italy went into the final quarter leading (39-36) and finally their full court press paid out as they overpowered Spain with clinical finishing to blow their opponents away.