Lithuania are the only team with a perfect record at the 2013 U18 European Championship Division B in Miskolc on day 6 of the tournament.

They beat Group E rivals Bulgaria (102-88) in the opening game of the Quarter-Final Round.

A 15-0 run during the first quarter set Lithuania on their way with nine minutes played (24-9). Lithuania's strength in the paint (72 points) was too much for their opponents as they cruised to victory. Dalia Belickaite and Laura Juskaite had 26 and 23 points respectively for the winners.

Teodora Dineva had a game high 27 points for Bulgaria.

Poland did not give Ukraine any chance during the first 24 minutes of the game. Leading (44-17) they just paced themselves the rest of the way to win (69-72). 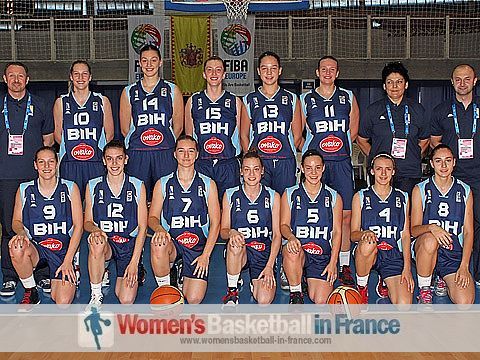 Group F is nicely set up after Belgium and Hungary were falling for the first time in this competition. This means that the final games on day 7 are winners take all, that is qualification direct to the semi-final stage of the European Championship competition.

Latvia beat Belgium (57-56) in a match that was decided at the free-throw line during the last 40 seconds. Elina Berzina hit a couple to put Latvia in front (57-55) while Kyara Linskens split hers for Belgium with 22 seconds left on the clock.

Hungary lost their unbeaten record in overtime to Bosnia and Herzegovina (65-66).

The only three-pointer by Bernadett Horvath from Hungary with one minute left in  the fourth quarter was enough to keep the hosts alive and eventually sent the game into overtime.

Andela Delic scored with 27 seconds left which turned out to be the game winning shot. She finished the game with the most points at 19.

In the lower classification games for 9th-18th place, Israel made a good start as they eased past Switzerland (63-33) behind a double-double performance by Daniel Raber with 16 points and 14 rebounds.

Also in Group G, Finland led from start to finish as they thrashed Norway (91-23) with everybody scoring.

In Group E, Austria got back to winning ways with a comfortable victory against Scotland (63-37). Sarah Sagerer  poured in 15 points and picked up 16 rebounds for Austria. Romania were never in trouble after a 12-0 run during the first quarter to set them on their way to victory (69-47) against Denmark.