The First Round of the 2013 U18 European Championship for Women Division A ended with all the newly promoted teams from the 2012 U18 Division B Championship failing to qualify for the Second Round.

The opening two games of the day just happened to be the most important with Turkey taking on Belarus, while Greece played Portugal.

The prize for winning was a place in the Second Round, while defeat meant three days of exhibition basketball and elimination from the title race.

England and the Slovak Republic already eliminated were shown no mercy in their last group games. 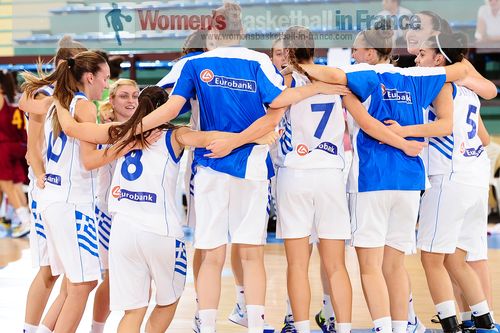 Turkey blasted Belarus during the second half of the game 48-24 to clinch their place (79-55).

Turkish center Basak Altunbay compiled a double-double of 14 points and 10 rebounds while Serife Onar added 15 points and 4 assists. But the player of the match was Melis Gulcan who finished with 17 points, 6 rebounds and 4 assists.

Greece had no problems seeing off Portugal (68-43). Greece finished the game as a contest during the second quarter 23-2 to walk into the locker room leading (45-12).

Anna Stamolamprou and Pinelopi Pavlopoulou scored 18 and 17 points each for Greece.

Belarus and Portugal join England and the Slovak Republic in the exhibition Group G in which all four teams play each other once before being reintegrated into the 9th - 16th place classification round for the final phase of the European Championship. 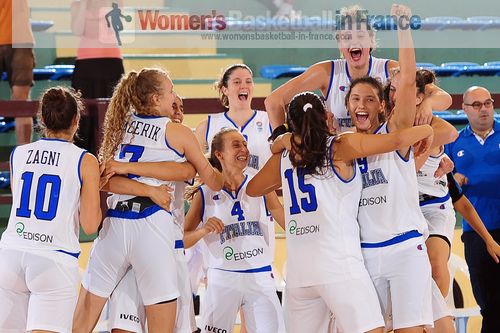 Serbia took Group C title by beating Sweden (58-44) on the back of a triple double by Aleksandra Crvendakic (11 points, 11 rebounds and 10 assists).

In Group D, France had another comfortable day with a victory over the already eliminated Slovak Republic (50-27).

In the more important game to determine second place in the Group, Italy sneaked past Slovenia (59-58) with Elisa Penna scoring the last 2 points of the game from the free-throw line.

The six teams that make up the Second Round Group F are France, Serbia, Sweden, Italy, Greece, Slovenia.

In Group B, Spain were already assured first place and England already eliminated so their match had no value. All the same Spain thrashed England (92-33) with five players in double digits.

Russia on the other hand had to work a little harder to overcome hosts Croatia. The Russians won the battle of the rebounds to ease past the hosts (62-42) to claim second place in the group.

Croatia, the hosts go into the next phase with nothing from the First Round.