On day 5 Italy and Russia punched their tickets for the 2013 U18 European Championship for Women Division A in Vukovar and Vinkovci.

The Slovak Republic are the only team not to have tasted victory after five days of action. They were beaten by England (51-57) in their Group G encounter, while Portugal won their second game (67-45) against Belarus.

Portugal have won the exhibition group with a game to spare and will enter the 9th - 16th place qualification round as 5th seeds.

Greece are the first team from the Second Round to be eliminated from the competition. 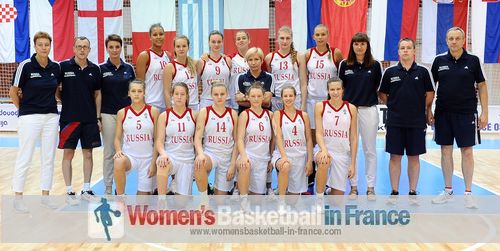 Russia conceded just 9 points during the last 20 minutes as they handed the Netherlands their first defeat of the tournament. For Russia Anna Shchetina finished with a double-double of 10 points and 10 rebounds while Ksenia Levchenko and Polina Fedorova contributed 11 points apiece in the victory.

With this win Russia have qualified for the quarter-finals. Spain continue their march with a blow-out victory against Turkey (75-32). Ariadna Pujol helped herself to a game high 20 points.

The Czech Republic ended their encounter against the hosts Croatia with a 21-2 run to win (72-47).

The margin of victory for the Czech Republic means that Croatia need to beat Turkey by over 43 points in their last Group E game to qualify for the European Championship quarter-finals.

Turkey will advance by beating Croatia but a defeat could see the Czech Republic qualifying.

Italy edge Serbia in a thriller 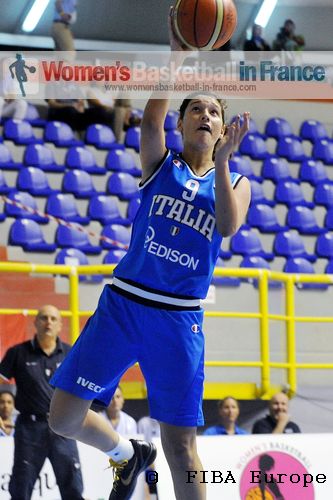 Italy scored just 1 point during the last 6:30 minutes in their match against Serbia but ended up winning (64-62). Cecelia Zandalasini (9 rebounds) (in picture) and Antonia Peresson hit 21 and 19 points respectively to send the 201O European Champions into the quarter-finals.

France remain unbeaten after holding off low scoring Sweden (55-44) while Slovenia eliminated Greece (67-56) with strong performances by Eva Lisec (9 rebounds) and Klara Zupancic with 16 and 15 points each.

Sweden meet Slovenia on the last day of the second round action with the winner of this game qualifying for the quarter-finals. The loser has to settle for the 9th - 16th place Cassification Round.