2013 U16 European Championship
Division B: Serbia set pace in Group A

For the second day of the 2013 European Championship for Women Division B in Matosinhos, only teams from Group A were in action.

With Group A being the only group with five teams, the three other groups have two additional rest days as the first round is played over five days.

Belarus who did not play on the opening day made their début in the competition against Ukraine while Serbia and Switzerland faced each other to determine who would go top of the group.

Serbia scored the first 11 points of their match and had everything going their way by the end of the first quarter (26-12).

Switzerland did not give up and during the second and third quarter more or less matched their opponents despite losing the rebound battle. 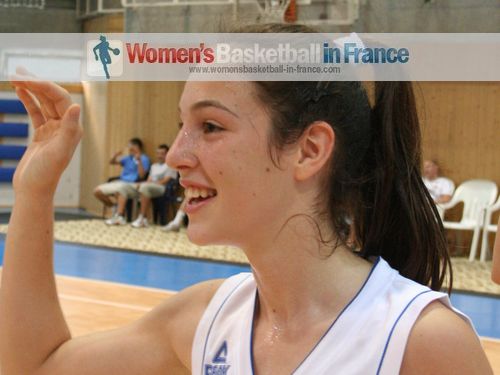 All the action was happening in the paint as the two teams combined for 0-from-7 from beyond the arc.

During the final quarter, Serbia put together a 12-o run to end any chance of an upset on their way to a (86-52) victory.

While the victory was good, Zoran Tir their coach should not be happy with the 34 turnovers. Marija Stojiljkovic had a productive 17 minutes for Serbia with a game high 14 points.

Aleksandra Katanic (in picture) who played for 29 minutes had a mixed day scoring 13 points and getting 7 steals. She also turned the ball over 8 times.

Belarus started their encounter against Ukraine cautiously and trailed after ten minutes (11-14). They stepped on the gas during the second quarter with an 11-0 run to take the lead for good  (22-15) after 14 minutes.

The (69-57) victory for Belarus was mainly due to the 21 points from Valeryia Smarshko and the 15 points and 3 assists from Anastasiya Sushchyk.

Olga Yatskovets was the main player for Ukraine with a double-double performance of 19 points and 19 rebounds.