If the intensity displayed on day 9 of the U16 European Championship in Matosinhos carries into the semi-final games on day 10, then the supporters of youth basketball are in for a treat.

Ireland and Estonia came into this game with 0 wins and 5 defeats, so there was more than just pride at stake.

The game was lively from the start with Estonia having the better of the early exchange. This enabled them to go into the locker room with a slim advantage (40-37).

With close to 100 supporters from Ireland in the stands, the Irish players picked up their game during the second half.

Olivia Dupuy and Sarah Kenny who both finished with 23 points found their range from behind the arc for their side to pull away to win  (77-68).

Kadri Uiga was the leading scorer for Estonia with 21 points.

There was a lot to celebrate for Ireland because they did not participate in 2012 and lost all their games in 2011, so this was their U16's programme first win since 2010. 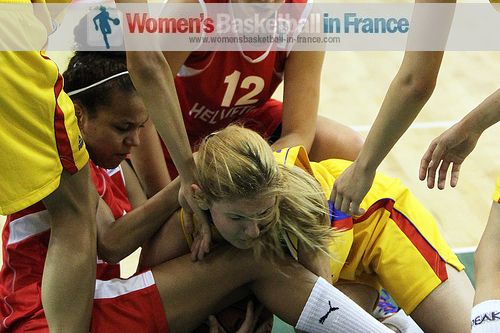 Switzerland held off Romania in an exciting finish (69-63). Switzerland had been leading comfortably for the majority of the match but with 100 seconds left to play their advantage was down to just 2 points (61-59).

Evita Herminjard's drive to the basket 10 seconds later gave Switzerland the breathing space they required to hold on to the victory.

However the best game of the day was between Ukraine and Luxembourg.

The game went into double overtime and was only decided 15 seconds from the end when Kristina Karp skipped to the basket to put Ukraine in the lead for good. Alina Lakh (16 points) then split a pair of free throws to ice the victory.

Luxembourg who should have won the game during the first 40 minutes were led by Lisa Jablonowsk who scored 21 points.

Luxembourg have no choice but to win their final game of the European Championship on day 10 to have a chance of finishing in the top 10.