2013 U16 European Championship
Seven teams qualify for second round

On the second day of action in the 2013 U16 European Championship for Women the Group A and Group B games were played in Varna, while the other games were held in Albena.

However the change in the arenas made no difference for France, Italy, Spain and Russia as they won for the second time. All four teams have qualified for the second phase of the competition.

Sweden on the other hand are the first team to be eliminated from the title race after losing to Turkey. As a result Latvia and Turkey have also qualified for the next phase.

For Belgium, Bulgaria and the Slovak Republic who are also on two defeats the objective for the last day of the first round of group games is a victory. A defeat will leave them out of the European Championship title race and place them in Group G with Sweden.

What happened in Varna 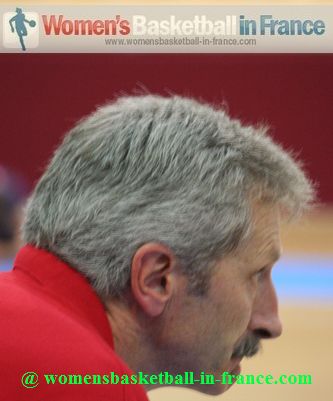 The pacing up and down in his coaching area of Evaristo Perez (in picture), the Spanish head coach, is one of the highlights of youth basketball. He makes the impression of giving his players all his energy.

His team did not allow the hosts Bulgaria to settle with Spain finishing the first quarter with a 9-0 run to lead (20-9).

It was simple the rest of the way for Spain with all 12 players playing at least ten minutes and also scoring as they cruised to victory (69-36). Angela Salvadores was the only Spanish player in double digits with 12 points while Debora Filipova had 15 for the hosts.

In the other game in Group A, Croatia used a 13-0 run during the first quarter to gain the upper hand over Greece. They stayed in front the rest of the way for a comfortable victory (64-33).

It was the turn of Anita Kelava to step up for Croatia with 15 points and 11 rebounds.

In Group B Russia destroyed Latvia (90-39). The damage was done during the second and third quarter in which Latvia managed just 6 points. In that time Russia scored 48 points.

All the Russian players scored and Raisa Musina had the honour of leading the scoring with 21 points (contributing 19 points in the first half). Latvia's top scorer was Digna Strautmane with 14 points.

Sweden made things difficult for themselves early with Elin Setzman and  Fanny Waldling in foul problems. But they managed to rally back to set up a tight finish.

Fanny Hakansson almost saved Sweden with 17 points, 11 rebounds and 7 assists. Yet an important block by Meltem Avci knocked her out of her rythm for the last 30 seconds. 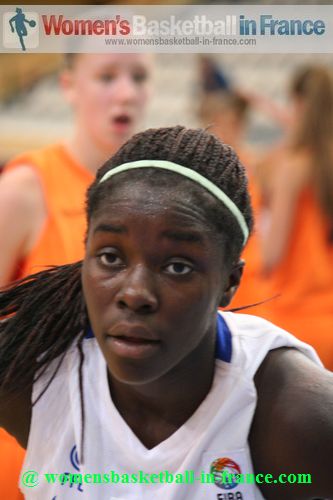 France are not doing anything spectacular at the moment. However with a mature performance from Ornella Bankole (in picture) with 13 points, 11 rebounds, 3 assists and 3 steals, France held off the Slovak Republic (57-42).

Their Group D rivals, the Czech Republic are back on track after seeing off Hungary (57-49) in a match in which both sets of supporters set the hall alight with drums and horns.

Hungary join France in the second round despite the defeat.

It was a physical game with plenty of scraps on the floor for lose balls. Petra Holesínská was the match winner for the Czech Republic with 17 points and 4 assists while Dorottya Nagy was impressive for Hungary with 18 points and 12 rebounds.

In Group C, Italy won the match of the day against the Netherlands (60-56). It was typical of U16 basketball with both coaches left wondering after their players turned the ball over time and time again.

Mariella Santucci and Francesca Pan scored 16 and 15 points for Italy while Janis Ndiba had 16 points and 19 rebounds for the Netherlands.

Lithuania played to their strengths as they beat Belgium (60-44) for their first victory in this European Championship.

7 consecutive points by Martyna Petrenaite late in the second quarter opened up a 10-point lead for Lithuania (26-16) and set them on their way.

Belgium got no closer than 7 points and were powerless against the height of their opponents.

Petrenaite finished with 19 points and 10 rebounds as one of three Lithuanian players to finish with a double-double, followed by Laura Juskaite (14 points, 17 rebounds) and Karolina Visockaite (10 points, 15 rebounds).