2013 U16 European Championship
Day one recap

The 2013 U16 European Championship for Women in Bulgaria opened with the favourites getting off to winning starts in Albena and Varna.

The new relegation rules mean that finishing in the first three places during the group phase does not guarantee the teams being assured Division A status.

The nations must accumulate enough points over the preliminary and qualification round to qualify for the quarter-final in order to avoid the 9th - 16th place classification round.

Traditional favourites get off to a good start 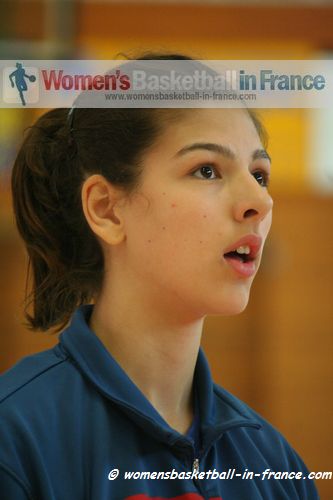 France made up for their defeat against the Czech Republic in the final of the European Youth Olympic Festival (EYOF) with a (58-50) opening game victory.

Foul problems for Julia Reisingerová  (8 points and 9 rebounds) from the Czech Republic caught up with her as she fouled out during the final quarter. Ana Tadic (in picture) was leading France with 15 points and 7 rebounds while Tereza Sípová top scored for the Czech Republic with 13 points.

Russia picked up from a slow start (12-16) to blow away Turkey (76-44) to get their championship off to a perfect start.

Maria Vadeeva compiled a double-double of 13 points and 12 rebounds for Russia, while her team-mate Alina Bespaltseva was a perfect 5-of-5 from the floor with 10 points. Anastasia Zaytseva was credited with 7 assists in the victory.

The confrontation between Angela Salvadores (20 points, 12 rebounds) from Spain and Ivana Dojkic (26 points) from Croatia lived up to its promise. It was yet Spain that squeezed past Croatia (62-58) on the match of the day.

Belgium are still building a new generation of players that showed during the first ten minutes of their match against Italy. They were leading (10-5) and then conceded the last 17 points of the quarter. Italy completed the 22-0 run early in the second quarter to pace themselves to victory (58-37).

The Netherlands did not give Lithuania much chance. During the first quarter all 8 points for Lithuania came from Laurita Jurciute while the Netherlands were already on 25 points.

The Netherlands won (86-54) with the duo Laura Westerik and Janis Ndiba scoring 19 and 18 points each.

Greece beat the European Championship hosts Bulgaria (62-53) on the back of 21 points and 14 rebounds by Maria Fasoula.

Latvia won the Nordic derby against Sweden (65-56) with a solid performance by Paula Strautmane with 19 points and 5 assists. Hungary led from start to finish in their 32-point victory against the Slovak Republic (73-41).