Ros Casares are yet to be beaten

Ros Casares dominated the first 20 minutes in their last EuroLeague Women Final 8 group match (51-24) against Wisla Can-Pack with all 12 players getting at least two minutes on the court.

They hit almost 60% of their shots while their opponents struggled to get anything going offensively.

The second half of the match was much more competitive although neither side was pushing too hard. Roberto Iniguez, the coach from Ros Casares, continued to rotate his players while José I. Hernández waited until the final quarter to give his bench a run.

The match-up between the two Russian teams 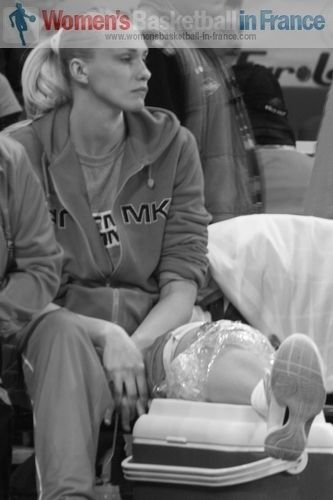 The first ten minutes was up and down offensive basketball with neither side able to gain any advantage.

Maria Stepanova (in picture) from UMMC went down on the offensive end of the court with two minutes played and had to be helped off the court.

UMMC had the first 5-0 run of the game to take any early lead (10-2) but Sparta&K was quickly back with also a 5-0 run of their own. Afterwards the teams traded basket for basket till the end of the first quarter with UMMC leading (25-22).

Becky Hammon and Seimone Augustus led the Sparta&K charge with 7 and 6 points each while Yelena Leuchanka with 6 points for UMMC with 6 points.

Although UMMC were not able to continue their hot shooting from the first quarter (60 %), the second quarter turned almost out to be a carbon copy of the first ten minutes, with two lead changes, a 5-0 run for Sparta&K quickly followed by a 6-0 run for UMMC.

UMMC went into the locker room ahead by 3 points (40-37) with Candace Parker leading the way with 10 points, while Hammon had top scored with 11 points for Sparta&K Moscow Region Vidnoje.

The match became rather technical as the two sides played cat and mouse until UMMC took control of the game for good with a 13-0 run. This enabled them to go into the final quarter with a 10-point lead (63-53).

UMMC failed in blowing away Sparta&K. But 13 last-quarter points from Sue Bird (right) kept them in control to the end to win (86-80).

Another Spanish team in the EuroLeague Women final

Essence Carson from Rivas Ecópolis was quickly into her stride and scored the first 5 points of the match with the Spanish club on its way. 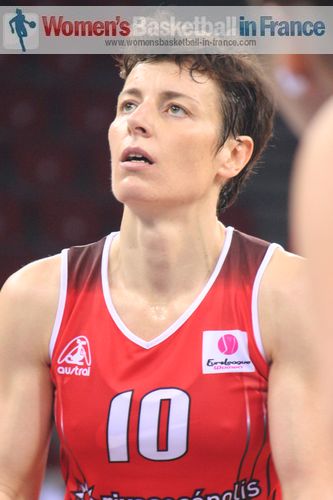 Once again Anna Cruz was doing all the little things that are not picked up on the statistic sheet keeping her side in control.

The two teams mixed zone with player to player marking and as aconsequence neutralised each other.

Rivas led (20-9) after eight minutes and ended up winning the first quarter (22-15). The difference between the two teams then was the two three-pointers by Elisa Aguilar (in picture).

The second quarter was a completely differencit. However each time they got close to levelling the score Rivas managed to pull away.

Yet Rivas failed in taking a 7-point lead into the interval due to a fast break buzzer-beater lay-up by Zane Tamane from Fenerbahçe (42-37). 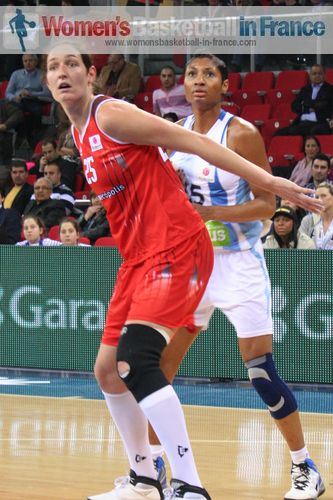 Rivas stepped up defensively in the third quarter and allowedFenerbahçe just 4 baskets, while going further ahead.

The tactics did not please the Fenerbahçe coach and resulted in a technical for him with 56 seconds to play in the third quarter.

The last quarter was an exhibition of what EuroLeague Women club basketball is all about with the pendulum swinging from one team to another.

The game came to its climax with 42 seconds left to play when Birsel Vardarli's three-ball made it a 1-point game. Yet this was as close as Fenerbahçe was to get because 30 seconds later Vardarli had the ball taken away by Asjiha Jones who then fed the ball to Cruz who finished with a lay-up for the victory.

Galatasaray Medical Park won the last match of the day (80-71) against Beretta-Famila from Schio. The match was spoilt by the injury to Chiara Consolini from Beretta-Famila during the second quarter.

The game started at a slow pace and initially the Italian team offered little in defense while the Istanbul side took advantage and opened up a double-digit lead (26-14) by the end of the first quarter. 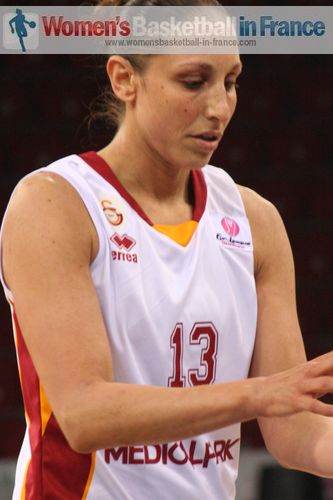 Galatasaray pushed their advantage up to 16 points during the second quarter but eventually had to settle for a 12-point lead at the break (44-32).

The second half of the match was more competitive and with one minute to play Galatasaray's advantage was down to 5 points. Yet the hosts survived the storm and now play for fifth place.