Who else is playing basketball in week 14 of LF2?

Nadja Morgan (left) was on fire hitting 12-of-13 shots for 27 points as Voiron ended the winning streak of Alexandra Tchangoue and Le Harve (75-69).

Khadidiatou Gassama and Faeza Bouderra added 16 and 10 points as Voiron continue to climb up the table.

Tchangoue was the top scorer for Le Havre with 24 points.

Marlène Duquesne (right) chose this weekend for her best match of the season with 21 points for Dunkerque in their victory against Illkirch-Graffenstaden (74-69).

When it comes to playing basketball patiently, then Roche Vendée are amongst the best in the second division.

They had five players in double digits as they beat Rennes (84-64). However they had to wait until a final quarter blitz 32-10 to secure the victory.

Lyon BF maintain their grip on the championship by beating the CFBB (69-51) while Limoges remain in third place by beating Angers (54-38). 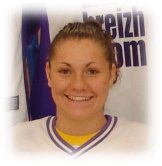 Pleyber-Christ got back to winning ways in a high turnover game against Elan Béarnais Pau Lacq Orthez (67-48).

Aude Kernevez (left) scored 19 points and dished out 5 assists in leading her team to victory.

Elan Béarnais Pau Lacq Orthez remain bottom of the division and are now three games behind the other teams in the relegation zone.

Armentières had to wait until the final quarter to get by Perpignan (62-54).

With the game tied (44-44) Marie-Frédérique Ayissi (left) and Anaïs Déas came to the rescue of the hosts to finish the match with 18 and 13 points each.