The rest of the basketball news from round 13 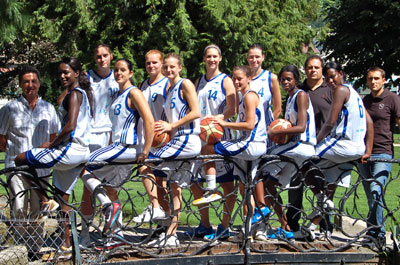 Voiron are the big winners this weekend. By beating Dunkerque (71-62) they move into 5th place and are just one game behind Limoges in 4th place.

In the end there was not much between the two teams. The difference at the end was the three-point shooting count, in which Voiron won 4-1.

Khadidiatou Gassama and Nadja Morgan with 16 and 13 points each did most of the damage for the hosts while Linda Bousbaa and Mariame Dia with 14 and 12 points were the top scorers for Dunkerque.

Perpignan successfully kept Naignouma Coulibaly from Pleyber-Christ out of the game by putting her in foul problems. Coulibaly managed just nine minutes on the court before fouling out.

However she still managed 6 rebounds and drew 3 fouls in that time.

For Perpingnan Fatou Dieng led the way with 16 points and 5 assists.

Illkirch-Graffenstaden fell at home for the second week in a row. AL Aplemont Le Havre walked away with the victory (63-65).

Alex Tchangoue scored the game winning shot on the buzzer.

In the last match of the weekend Rennes beat Angers (56-44) with former youth international Yvette Assilamehou leading the way with 17 points.

The encounter between Elan Béarnais Pau Lacq Orthez and Armentières was called off.