Fans of NF1 basketball have been waiting for Caroline Nestor-Deininger to come back to her best after her injury last season. She scored 13 points, picked up 4 rebounds and handed out 2 assists.

Bettina Kadila who also missed most of last season with a knee injury had her best game for the SIG and scored 11 points as her side beat Charney-lès-Macon (77-59).

Melissa Washington played for Strasbourg ABC last season and is known by the supporters of the SIG.

However the largest welcome went to Kaoutar Rhennam who also played in Strasbourg for Racing Strasbourg during her youth career.

After a crazy first quarter (27-27), the SIG had to wait until the 16th minute in the second quarter (36-36) before making the first break of the match.

Charline Servage (20 points) fired in back to back three-pointers off passes from Nestor-Deininger.

Then Aline Fischbach also connected from beyond the arc. The SIG finished the scoring through Lucie Battaglia which enabled them to go into the interval (47-38).

The SIG lost their way during the third period and fell behind as Washington (13 points), Margot Lety (16 points) and Charlotte Sanchez scored for the guests (53-52) with 27 minutes played. 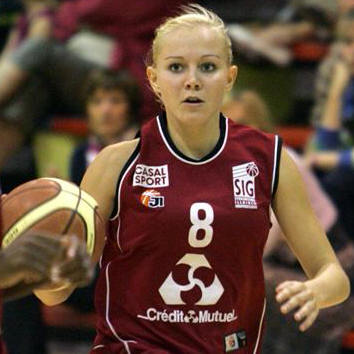 The SIG woke up in time and regained the lead through Darline Nsoki to go into the final quarter with a 6-point advantage after scores from Servage (left) and Nestor-Deininger.

The final quarter belonged to the SIG as their opponents ran out of energy and ideas.

It was not a perfect performance from the SIG. They hit just 16-of-26 from the free-throw line and attempted too many shots from beyond the arc. But this is the type of game they had lost at the beginning of the season.

The last two games of the year for the SIG are away games against Dunkerque and Charleville-Mézières.

Charnay showed during the first and third quarter that they have the quality to play NF1 basketball. Now they must work on playing concentrated for 40 minutes.

What else happened in NF1 basketball?

UHB-SA won their second game of the week by beating Pleyber-Christ (51-42).

UHB-SA needed seven minutes to take control of the game and led (18-13) by the end of the first quarter.

They went into the interval leading (37-28). The second half of the game was a festival of poor shooting from both sides. 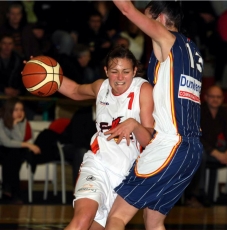 Dunkerque scored the first points of the game but only led for just 30 seconds.

Djéné Diawara fired in a trey for Charleville-Mézières that set her team on the way to victory. Diawara led the scoring with 22 points.

She was joined in double digits by Sarra Ouerghi (right) and Amel Bouderra with 16 and 12 points each. For Dunkerque Katalin Kurtosi scored 21 points.

Charleville-Mézières remain tied for first place while Dunkerque move down to third.

Roche Vendée required overtime to get past Reims (85-77) while CSP Rezé did just enough to beat Voiron (45-39).