Another shooting festival by Villeneuve d'Ascq 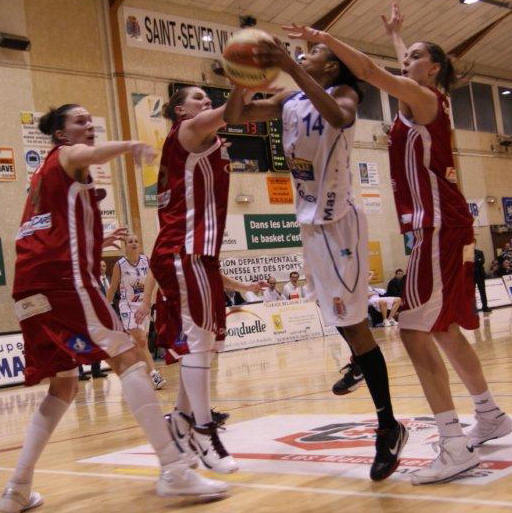 There were fireworks from the tip-off with Villeneuve d’Ascq starting the game with a couple of three-pointers. Aja Parham opened her account for Basket Landes with a shot from behind the arc.

Basket Landes' relief was short lived: Elodie Bertal got the guests back on track with two more three-pointers as her side went 11 points clear (16-5) with just over five minute played.

Defense went out of the window as both teams traded baskets for the rest of the quarter with Villeneuve maintaining their advantage (28-18).

The two sides continued to play offensive basketball all through the second quarter with neither of them being able to gain the upper hand. Villeneuve d’Ascq went into the locker room leading (51-41).

After the break Villeneuve stamped their authority on the game with Bertal and Emilie Gomis leading the way to go 17 points clear (62-45).

The hosts, with in particular Parham, continued to battle to go into the final quarter trailing (60-73).

Basket Landes then took advantage of their opponents' last-quarter jitters to score the first 8 points (68-73) to set up a dramatic finish.

However Gomis and Lady Comfort put an end to Basket Landes' uproar with 5 quick points.

Villeneuve went on to win their third consecutive LFB match (81-73). Gomis led the scoring with 26 points. She also drew 10 fouls. Bertal, Jolene Anderson and Ana Cata-Chitiga contributed 15, 11 and 10 points each.

Parham (right) was the best player on the field and scored 22 points in defeat.

Limoges so close and yet so far

Limoges surprised their hosts Toulouse at the start of the game by scoring the first 8 points of the game. They led (13-4) midway through the quarter.

Bintou Dieme on her début for Toulouse and Emilie Maurice put an end to the onslaught. They contributed 6 points to their side's 11-2 run to finish on level terms after ten minutes. 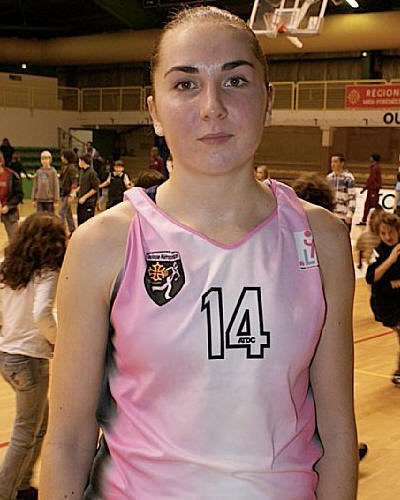 The second quarter belonged to Kateryna Dorogobuzova (12 points in picture) from Toulouse who fired in 3 three-pointer.

Her first trey put Toulouse into the lead (18-15). Despite both teams trading baskets her final three-pointer enabled the hosts to go into the locker room ahead (40-36).

The third quarter was a typical LFB match between teams struggling at the wrong end of the table. There was a lot of heart, physical clashes, players falling all over the court, very entertaining but low on technique.

Milica Belanski split a pair of free-throws for Toulouse to lead (50-49) at the end of the third quarter.

Toulouse stayed in front all through the last ten minutes thanks to solid defending and excellent work from Agathe N'Nindjem-Yolemp (18 points) and Maurice (13 points) to win (71-66).

The player of the match was Awe Geye from Limoges with a game high 29 points.

Can Nantes-Rezé start to think about the LFB play-offs?

Pauline Krawczyk required five seconds to open her account for Montpellier. She scored again by splitting a pair of free-throws. Then Alexia Plagnard made it (5-0) with 90 seconds played.

Mame-Marie Sy-Diop started the Nantes-Rezé revival and with three minutes left to play in the quarter Lindsay Taylor put the guests in front (6-5).

Montpellier regained the lead briefly through Constance Jinks but 5 late points including a trey by Sy-Diop allowed the team of Laurant Buffard to win the first quarter (15-9).

The second quarter was an even affair with the big ladies in the paint from both teams taking over the show.

Sandra Dijon-Gérardin was all over the place for Montpellier, rebounding, defending, drawing fouls and getting assists.

However Taylor (16 points) from Nantes did a little more than Dijon-Géradin (13 points). She scored the last 6 points of the quarter which included a three-pointer for Nantes to go into the locker room ahead (31-23).

Nantes changed tactics after the break and went to the outside shooting of Leslie Ardon, Kathleen MacLeod and Yuliya Andreyeva.

Montpellier struggled with the offensive system of Nantes and fell behind by 20 points (34-54) after a trey by Mélanie Plust with a minutes left to play in the quarter.

Dijon-Géradin had not given up the game for Montpellier and scored 3-of-4 from the charity stripes to finish the scoring (37-54). 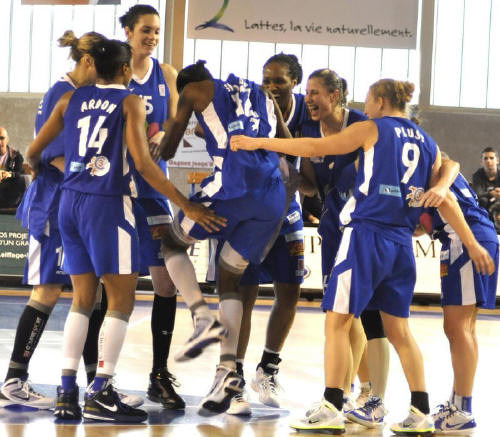 Montpellier were more aggressive during the final quarter and started to bring the score down with several trips to the free-throw line.

A trey by Krawczyk with three minutes to play (52-59) forced Laurent Buffard to call for a time-out.

Buffard brought back Ardon and Sy-Diop into the game and Montpellier failed to score again.

Sy-Diop (19 points) finished the game with a buzzer beater three-pointer for Nantes-Rezé to win the game (64-52).

Nantes-Rezé will stay in the battle for a LFB play-off spot while Montpellier are now two games behind.

Tarbes and Arras come away with victories

Arras, playing at home, struggled for 30 minutes against their guests from Mondeville and went into the final quarter trailing (42-50).

With a trey Sarah Michel tied the game (54-54) with just over six minutes left to play.

Pauline Akonga Nsimbo (15 points) put Arras in the lead for good. But it was Johanne Gomis (17 points- in picture) with 7 consecutive points that put the game out of the reach for Mondeville.

Challes-les-Eaux' 2010 unbeaten series has come to an end with a home defeat against Tarbes (62-74).

With the victory Tarbes have booked their ticket for the LFB championship play-offs. Isabelle Yacoubou-Dehoui was again the player of the match with a double double of 28 points and 10 rebounds.

Fatimatou Sacko and Frida Eldebrink scored 15 and 14 points each while Florence Lepron dished out 5 assists and collected 11 rebounds.

Laina Badiane was the leading scorer for Challes with 17 points.