Great Britain hustling their way to victory against Hungary

Both teams started very aggressively and went for their shots quickly.

Great Britain had a slight advantage (11-10) with five minutes played thanks to a jump shot from Mairi Buchan.

Hungary were the first to change their tactics and started to take command of the game with clutch shooting from Mirjam Sipos (15-13).

However Hungary were not able to pull away. Great Britain drew level on the buzzer with a rainbow three-pointer from Charlotte Stoddart (20-20).

The second quarter was end-to-end youth basketball at its best with neither side giving a centimetre to work in the paint. They were playing at a very fast pace with points coming from all over the court.

Great Britain went in front after a series of three-pointers by Kristie Sheils and Katrin Chiemeka and an inside move by Hannah Shaw with two minutes left to play in the quarter.

Great Britain went into the interval ahead (33-29).After the break Great Britain did not let up. This resulted in Alexandra Theodoreán picking up her fourth foul of the match in frustration.

In the meanwhile Great Britain scored 8 unanswered points to open the first significant lead of the game (41-29).

Nikolett Sarok ended the Hungarian drought with a cool baseline jumper just inside the arc before the 24-second clock buzzer went off.

In a game full of twists and turns, the pendulum was starting to swing in favour of Hungary and in particular Györgyi Öri as they scored 6 consecutive points.

The intensity level picked up and Great Britain once again scored on the buzzer through Stoddart to go into the final quarter leading (48-43).

Patience became the name of the game during the final quarter with just 4 points scored in the first six minutes, all for Hungary.

Hungary took the lead with just under three minutes to play when Réka Bálint fired in a trey (50-48).

Great Britain scrambled but got themselves back on level terms with Tamzin Barroilhet picking a loose ball to score.

Chiemeka then hustled the ball off at mid-court from Öri but failed in her lay-up attempt, yet striped the ball off Öri, got fouled and scored 2 points from the free-throw line for Great Britain to go ahead again (52-50) in the last minute.

Hungary missed in their last play and were hence forced to foul Great Britain with the result of loosing (54-50).

Portugal got past Israel

Portugal dominated the defensive boards forcing Israel into taking distance shots for most of the game.

Portugal were able to play the game at a pace that suited them. Their height advantage made the difference as they beat Israel (60-46) with Marcy Goncalves and Francisca Braga leading the scoring with 10 points each.

For Israel Shira Shecht led the scoring with 13 points while Idit Oryon compiled a double-double of 11 points and 10 rebounds.

Czech Republic was not intimidated by Macedonia 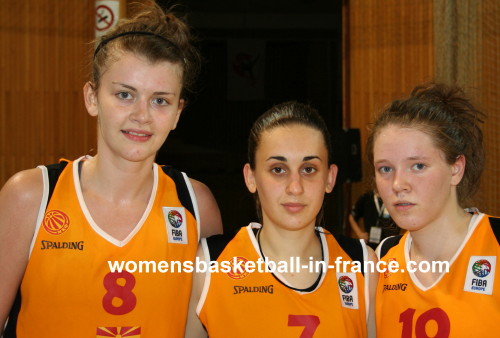 Playing at home Macedonia had all the fans in the hall behind them. However the game did not get off to an electric start.

The first basket came after almost 90 seconds from Andzelika Mitrasinovik for the hosts.

Alena Hanusová responded for the Czech Republic on the next attack. The pattern was set for the rest of the quarter.

The teams traded basket for basket in a low key first quarter with the hosts leading (17-16). 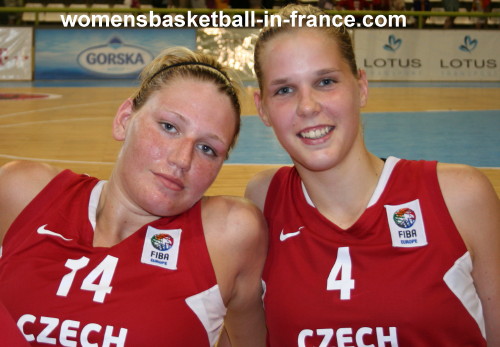 The Czech Republic players did not appear to panic. During the second quarter they took control of the boards and went into the locker room leading (35-30).

Neither team played particularly well during the third quarter. The Czech Republic protected their advantage while Jelena Antik single handedly kept Macedonia in the game with good free-throwing going into the final quarter (46-57).

The game fizzled out as a contest with the Czech Republic pacing themselves to victory (61-72).