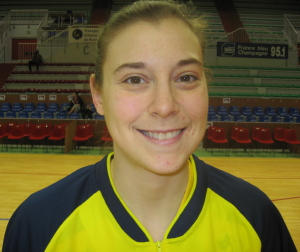 Laurie Koehn, the WNBA three-point Queen, explained that she felt very honoured to be playing at USVO. She believed the league was very competitive and she was hoping to develop her game and improve.

Listen to her comments here: 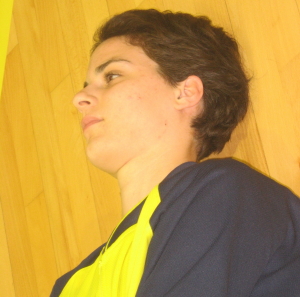 Reka Czerny is a Hungarian international and has had plenty of EuroLeague action with MKB Euroleasing. This is her first season playing in France. French is just one of the languages she speaks. Yet she agreed to share her thoughts about her experience of playing in France in English.

She said that she was really enjoying playing in Valenciennes. She always wanted to play in France because it was a strong championship and anybody could beat anybody. Overall this French season has met her expectations.

Listen to her comments here:

Three of the foreign women basketball players from Bourges Basket volunteered to send messages to their fans:

Sonja Kireta passed on a message in Croatian while Sonja Petrovic in Serbian.

Sonja Kireta sent a big hi to all the basketball fans in Croatia, Europe and the world. Sonja Petrovic said that she was thanking everybody for the support she had. She added that if you had the chance to come to France or Bourges, you should not think twice as everything is beautiful and wonderful.

Belinda Snell simply said she was enjoying the experience and was hoping to see her fans back home soon.

Players from Reims, Tarbes and Villeneuve d'Ascq speak about their experience