Toulouse had to wait until the third period before taking the lead against their hosts Roche Vendée to win (71-62).

With this victory Toulouse consolidate their position in fourth place. Toulouse's last two games of the season are at home.

Charleville-Mézières did not have it all their way against US Colomiers before coming away with the victory (93-81).

This victory keeps Charleville-Mézières on the heels of Toulouse and at the same time relegates Colomiers.

For Roche Vendée this defeats leaves them in no-man's-land.

Strasbourg ABC ended their negative series with a (91-81) victory against Voiron.

In the first two quarters neither team worried about defense. Strasbourg led (24-23) by the end of the first period but trailed (48-49) at the interval.

Melinda Washington led the scoring for Strasbourg ABC with 23 points and 15 rebound as they won. For Voiron it was tears as they were unable to leave the relegation zone. 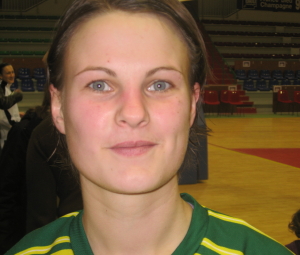 They were tears for Rennes as they fell (71-73) to Dunkerque in a very physical match.

Amélie Fresnais (right) led the scoring with 24 points for Dunkerque.

US Laveyron also finished in tears after allowing Ifs to dominate the second half of the match to win (62-57).

This victory may help Ifs escape the relegation zone at the end of the season.

The players from Nice may not have been paid for the last month but they had the first laugh of the day as they beat the CFBB (73-44).

For US Colomiers there were only tears as their loss means that they will finish in the relegation zone.

All the results from round twenty-eight for the Nationale Féminine 1 are listed below:

According to all the news Clermont-Ferrand will not be allowed to play in NF1 next season. If this holds then only three clubs will be relegated at the end of the season.

At present Pleyber-Christ and Colomiers are mathematically relegated. Either Ifs or Voiron will join them.

However if Clermont-Ferrand are allowed to play in NF1 next season then Ifs will be on the list of teams that are mathematically relegated.

This will leave Voiron, US Laveyron and Rennes battling against each other to avoid the drop.

But with news that Nice and Strasbourg ABC are in administration, the NF1 basketball relegation jigsaw puzzle may become irrelevant.

Look back at the NF1 Basketball news from round 27