Florence Lepron opened the scoring for Tarbes with her first shot of the game with just under a minute played.

Basket Landes reorganised themselves defensively. This slowed down the scoring of Tarbes and after eight minutes the teams were level (16-16).

Tarbes wrestled the lead back with Isabelle Yacoubou-Dehoui (right) and Pauline Jannault to edge the first quarter (19-17).

Basket Landes succeeded in slowing down Tarbes. The home fans had to wait for almost three minutes for a score by Yacoubou-Dehoui in the second quarter.

Yacoubou-Dehoui was the only player from either side scoring as she extended Tarbes' advantage (25-17) with 14 minutes on the game clock.

Lucie Cascailh was the catalyst that Basket Landes needed as they took full advantage of the poor display by Tarbes as they went in front (29-28) with 90 seconds left to play before the break.

Yacoubou-Dehoui scored her 12th point of the game with a couple of free-throws for the hosts. However a buzzer-beater three-pointer by Sabrina Reghaissïa took Basket Landes into the locker room with the lead (32-30).

The Tarbes supporters started to make more noise after the break which appeared to recharge their team.

Hamchetou Maïga-Ba and Yacoubou-Dehoui scored early in the quarter for Tarbes to go back in front.

The lead did not last long because the Bulgarian international from Basket Landes, Ekaterina Dimitrova, tied the game (34-34).

Frida Eldebrink finally put Tarbes on the way with a trey and the flood gates opened with Emma Randall and Isis Arrondo joining Hamchetou Maïga-Ba in the scoring as they went 16 points clear (52-36) going into the final quarter.

Tarbes were not troubled for the rest of the game and had the match won leading (63-45) after 36 minutes of play.

Basket Landes are not a team to give up easily. But with Anaïs Le Gluher fouling out and Aja Parham in foul problems, they lacked the fire power to overturn the deficit.

Tarbes went on to win (65-54) and are one step closer in picking up the regular season title.

COB Calais survived a last-quarter comeback from their guests Bourges Basket to win (69-68).

Bourges Basket failed to gain control early on which allowed Calais to lead by a single point at the break (37-36).

Anne-Sophie Pagnier (left) and Jennifer Humphrey (17 points and 12 rebounds) scored the first 10 points for Calais after the break as they started to take control of the game (47-41).

Calais continued to maintain the pressure and went into the final quarter with a lead of 12 points (59-47).

Then Calais struggled during the last ten minutes as Bourges dominated the play and reduced the deficit. However Calais held on to the advantage (67-59) with money-time approaching.

Emméline Ndongue (15 points) almost rescued Bourges with back to back scores. But more importantly, she blocked Pagnier (20 points) and Humphrey to prevent them from scoring.

With 40 seconds left to play, Calais's lead was just 2 points.Aurélie Cibert fired off a shot which missed the target. But Humphrey picked up the offensive rebound and then scored what turned out to be the winning shot (69-65).

Paoline Salagnac's three-pointer for Bourges kept the suspense going right up to the moment of the final buzz. This is the first LFB victory for Cyril Sicsic against Pierre Vincent.

Provided Calais do not have any financial difficulties, this victory has secured their LFB status for next season.

Arras ran out winners (78-74) on the road against Nantes-Rezé. It was a strange game that neither team really dominated.

Arras went into the final quarter leading. Yet with five minutes left to play, it appeared that the Nantes was to take the game but it was not to be.

Kathleen MacLeod's (right) 17 points and 7 assists were not enough to secure victory. Now Nantes-Rezé are in a three-way tie for fifth place in the LFB. Arras remain in third place. 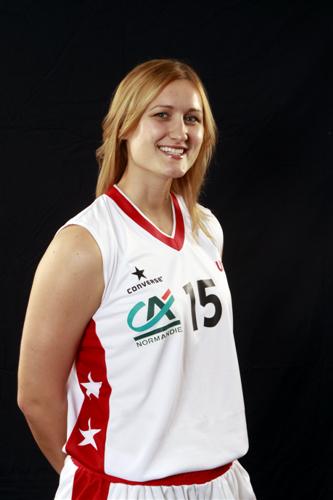 Clarisse Costaz was brought into action for Mondeville and scored 7 straight points, with 2 assists coming from Johnson for Mondeville to regain control of the game for good with eleven minutes played (25-16).

Valeriya Berezhynska (left) had a perfect LFB match with 21 points, 17 rebounds as Mondeville ended the match as a contest by the end of the third quarter (65-37).

Mondeville won the game (89-62) and are alone in fourth place in the LFB standings. They are just one game up on the three teams in fifth place.

Limoges, playing at home, surprised Montpellier during the first 20 minutes to lead (39-36) at the interval. 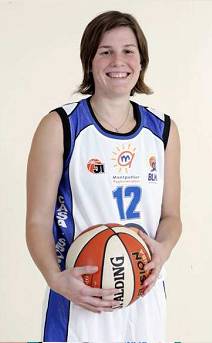 After the break Montpellier started to take control and led (48-44). However Awe Geye had no intention of allowing Montpellier to have it their way. So Limoges were back in front (61-55) going into the final quarter.

Valéry Demory, the coach from Montpellier, gave his players a good telling off before the start of the final quarter.

His players went to work, scored 19 unanswered points and dominated the final quarter 28-8 to win the game (84-69).

Gaëlle Skrela (right) was the player of the match with 26 points. 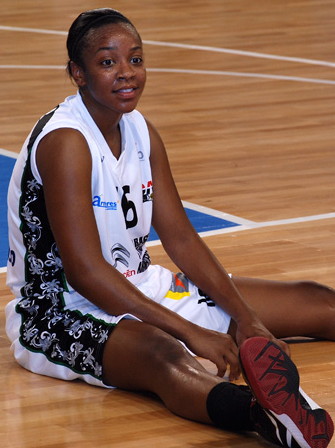 When Mia Fisher (left) starts a game like she did against Toulouse, it is normally a good day for her team.

Fisher scored the first points of the game, drew a foul and buried the free-throw. Her next move was a steal which then transformed into an assist.

She was not finished. She then won a rebound and recorded her second assist and Armentières led (7-1) with just two minutes played.

Agathe N'Nindjem-Yolemp started the fightback for Toulouse with most of her team's points as they drew level by the end of the first quarter (19-19).

Both sides were very cautious at the start of the second quarter with very little scoring (25-25) at the halfway point.

Armentières managed to change things around and scored 11 unanswered points to lead (36-25) at the break.

Toulouse never really recovered despite the efforts of N'Nindjem-Yolemp with 24 points.

Fisher finished with 23 points, 6 assists and 4 steals while Bremont scored 15 points as Armentières won the game (80-52) and move above Toulouse in the LFB standings.

LFB Round 22: victories for the leaders while Basket Landes beat COB Calais