Alba Torrens (left) from Spain was fired up from the tip-off. She scored 10 points as her side raced out to a (22-10) lead with seven minutes played.

After missing the semi-final Sancho Lyttle was back on court. She contributed 9 points as Spain dominated the first quarter (28-15).

At the start of the second quarter, Torrens continued with her three-point shooting festival but Belarus weathered the storm and started to hit three-pointers as well.

For the first time in the game Spain looked lost. It needed a shot from Anna Montañana to break the rhythm of Belarus to keep the advantage (41-28) with two minutes left to the break.

The match became a little stale as both sides struggled to find their way to the basket.

Tatsiana Likhtarovich for Belarus ended the scoring at the end of the quarter with a couple free throws. This left her team trailing (34-41) at the break.

Belarus changed tactics after the interval forcing Spain out of the paint. Spain struggled to hit their shots while Belarus chased after the score.

A three-pointer by Natallia Marchanka and back to back baskets from Yelena Leuchanka made it a 1-point game (45-46) with 24 minutes played.

Spain finally started to find their range from beyond the arc with Montañana and Valdemoro (left). This enabled them to go into the final quarter leading (64-53).

Belarus huffed and puffed all through the last quarter but were unable to break down the Spanish resistance.

So they reverted to attempting shots from beyond the arc, however without any luck. 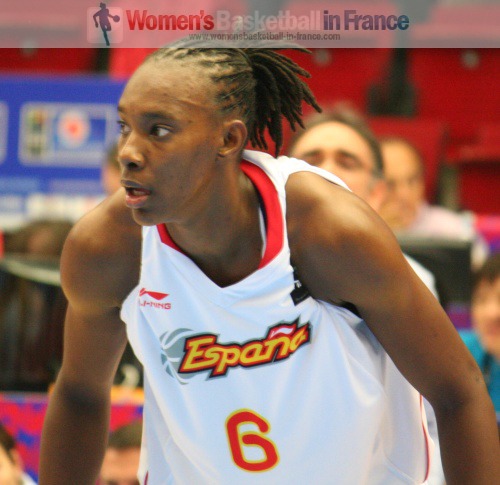 In the final minute of the game, Valdemoro gave the fans something to cheer about as she hustled all round the court.

She blocked Leuchanka at mid court and seconds later she went toscore the last points of the game.

Torrens, Valdemoro and Montañana all finished in double digits with 19, 16 and 12 points each.

Verameyenka fired in 20 points for Belarus while Leuchanka finished on 14 points.

France were unable to cope with the physical approach of the Australians. Therefore they were on the back foot from the very first minute of the game.

At the end of the first quarter Australia completely took control of the game with a 10-0 run (21-7).

In the second quarter Lauren Jackson picked up an offensive foulafter knocking Emméline Ndongue flying to the ground.

Her jest was not appreciated by the French players. When the referee heard an inappropriate comment from Jackson he issued her with a technical foul.

Jackson had to leave the game for a while as this was her 3rd foul. Australia still maintained the advantage (26-12) midway through the second quarter.

With Liz Cambage also on the bench with 3 fouls, France started to score more regularly. Even though Céline Dumerc got her 3rd foul too and had to sit out, France was making their way back into the game.

However Marianne Tolo (left), with 11 points in the first half, helped Australia keep the lead to walk into the locker room with an advantage of 11 points (36-25).

Despite trying hard all through the second half France were unable to bring down the deficit.

Jackson finished the game with 13 points for Australia while Godin (right) was the top scorer for France with 11 points.

Russia end their World Championship campaign on a positive note

Russia ended their tournament by beating Korea after a hard fight (69-57).

Elena Danilochkina and Illona Korstin scored 13 points each for Russia while Korea's Summin Jung and Ha Yeon Beon scored 17 and 15 points each.

Beon scored 5-of-8 from beyond the arc, while the rest of her team altogether had 5-of-7.

Russia had been undefeated during the preliminary and qualification round. They had to play without Becky Hammon in their last match of the 2010 FIBA World Championship to settle for 7th place.