Slovak Republic are the second team to make the final

Veronika Cernáková was highly motivated for the Czech Republic at the start of the match with 6 of her team's 8 points as they took an early lead. Maria Felixova and Klaudia Lukacovicová completed the 12-0 run as the Slovak Republic led (14-2) after seven minutes of play.

Alena Hanusová ended the Czech Republic drought with a three-pointer. However Cernáková and Felixova were unstoppable as the Slovak Republic dominated the first quarter (20-9).

Immediately after the first quarter the Czech players attacked the basket to reduce their deficit to (20-14) with Hanusová's two-pointer and a three-pointer by Katerina Bartonova.

With less than five minutes to go the Czech players came storming back (20-22) with Hanusová scoring again. 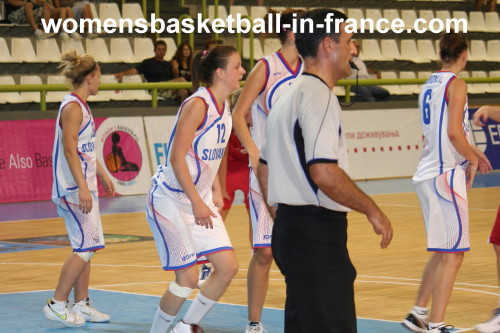 The game became rather scrappy with the Slovak Republic holding on to their advantage going into the locker room ahead (26-21).

After the break both sides stepped up defensively making it very difficult to make openings for scoring. Yet the Slovak Republic managed to slightly increase their advantage by 5:11 (34-26) after a solo effort by Cernakova.

However Bartonova responded for the Czech Republic with a reverse spin lay-up. But the Slovak Republic countered with steals and more fast breaks to increase the lead to (38-28).

Both sides played cat and mouse, scoring a three-pointer each by Cernakova and Adéla Filarova. But neither team was able to wrestle control.

Maria Felixova was the offensive and defensive focal point during the last quarter as the Slovak held on to the advantage (48-39) with six minutes to play.

A block by Hanusova led to Petra Zaplatova hit a three-pointer (41-48) for the Slovak Republic to take an immediate time-out.

Yet the Czech players were going on an 8-0 run with Renata Brezinova driving in the paint, quickly followed by Hanusova picking up an offensive rebound to score again (45-48).

Cernakova was fouled on the fast break and finished the job on the free-throw line.

The Czech Republic had 4.1 seconds to win the game but the Slovak Republic hung on to win (53-50).

For the Slovak Republic Cernakova, Felixova and Lukacovicova were in double figures with 19, 18 and 10 points apiece.

The Czech Republic had Hanusova and Brezinova with 16 and 11 points in double digits.

Israel beat Belgium (61-57) in a match that neither side was able to dominate for a long stretch.

Shira Shecht put Israel in front for good with a jump shot from the top of the key with just under three minutes to play (57-55).

The turning point of the game that finally ended the hopes of Belgium was the offensive charge called on Miete Celus which saw her pick up her 5th foul.

Israel with Naama Shafir controlled the last couple of minutes to hold on for the win.

In the final classification match of the evening Hungary had no problems in beating Greece (56-31) with 13 points coming from Réka Bálint and Dominika Gergely.

The Macedonian team secured their first victory of the tournament in beating Austria (78-60). They actually trailed in the first half (27-39), but then regained their composure with a 25-6 third-quarter blitz.

Their 18-point victory overturned the 9-point defeat in game 1 for them to win the series and take 9th place in this FIBA tournament.