In a slow start to the game Angeliki Nikolopoulou from Greece opened the scoring from the free-throw line.

The first point from open play came from Lenka Bartáková after almost four minutes of play.

Neither side was able to make a basket and Greece regained the lead with almost perfect free-throw shooting from Anna Kavasila (7-3).

The coach from the Czech Republic asked his players to step up and Katerina Zavázalová hit a baseline three-pointer for the last points of the quarter (6-7).

The second quarter was no better than the opening as both teams played slowly.

The Czech Republic started to make better shot selections and went in front for the first time with another trey by Bartáková with three minutes played (14-11).

The Czech Republic went on to hit a couple more three-pointers as they took control of the game and went into the locker room leading (28-16).

Greece were unable to get anything going. Alena Hanusová was having a field day as the Czech Republic went into the final quarter ahead (47-28).

The game fizzled out with the Czech Republic winning (71-37).

Top scorer for the Czech Republic was Hanusová with 18 points while Greece had Kavasila who scored 13 points.

The Slovak Republic had a disastrous start with their coach picking up a technical foul within the first three minutes. In addition they allowed Hungary to score 7 unanswered points. The Slovakian players were rather static for most of the first quarter allowing free runs for Hungary to take the first quarter (15-6). In the second quarter the Slovak Republic picked themselves up and started chasing after the score. With 2:54 minutes left to play, they were down by 3 points (16-19) with the catalyst Barbora Novocká. Immediately after the trey by Novocká, Klaudia Lukacovicová won her first duel at the offensive end against Orsolya Szécsi to score (both players in picture). The Hungarian coach called for a time-out and calmed his players down while disrupting his opponents' flow. The last points came from Györgyi Öri for Hungary to go into the interval leading (23-18). Both sides huffed and puffed for the first five minutes in the third quarter with the Slovak Republic levelling the score (25-25) with Dominika Baburova (left) scoring, followed by Veronika Cernáková with a baseline jumper. The pendulum then swung into favour of the Slovak Republic forcing the Hungarians to take a time-out at (28-31). Going into the fourth quarter, the Slovak Republic maintained their lead (33-30). The game came to life in the last two minutes of regular time when Mirjam Sipos fired in a trey for Hungary to edge in front briefly. But Cernáková was down the other end so fast to level the score once again. The crowd had no time to catch their breath with Réka Bálint putting Hungary back in front with a drive into the paint. However Lukacovicová put the teams back on level terms again with a baseline hook shot. Baburova fired in a shot from beyond the half-court a split second after the buzzer went off. So the game went into overtime (39-39). The fifth quarter was a ding-dong affair that reached its climax in the last 30 seconds. Bálint hit a baseline jumper with 14 seconds to play to bring Hungary to within 1 point. The Hungarians took seven seconds before fouling Baburova, who then hit her free-throws. Hungary had one more attempt to tie the game. But this time Bálint's shot fell short and the Slovak Republic won (49-46). In double-double were Lukacovicová for the winners with 18 points and 12 rebounds while for Hungary it was Szécsi with 11 points and 13 rebounds. 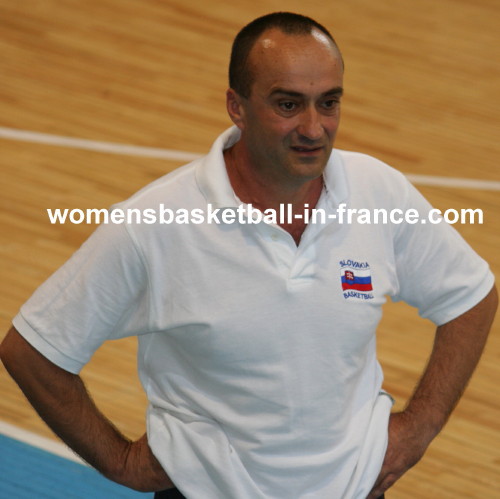 The girls sang happy birthday to coach Zeljko Vukicevic after winning the game. Zeljko Vukicevic explains in his native language that his players had a lot of heart to get this win. He knows that the match against the Czech Republic should be tough because he thinks that they are a very good team and the favourites for this FIBA competition.

(Note: If you are using Internet Explorer click twice on the triangle)

Portugal in semi-final for second time

As expected the two teams would not waste time in getting into the game with Maria Correia and Emmanuella Mayombo exchanging three-pointers. The two players traded baskets for the first five minutes (12-12) before Portugal made the first break of the match with a 6-0 run that resulted in a Belgium time-out. Belgium recovered their composure. Despite losing the fight in the paint with the last 6 points by Nele Poffyn the teams shared the first quarter (20-20). Belgium and Portugal continued playing fast basketball with Miete Celus trying to inspire her team with drives to the basket although she was blocked by Sofia Da Silva and Luiana Livulo. Yet Kim Snauweart picked up the loose ball to score to keep Belgium on the tail of Portugal (22-24) after five minutes of this quarter. However Portugal continued with their three-point offensive tactic with Michelle Brandao showing the art of it (29-22). This resulted in an immediate time-out by the Belgium's. Although the Belgian players were trying hard to imitate the three-point tactic of their opponents, their attempt failed for Portugal to go further ahead (31-22). The players from Belgium used so much energy in contesting the rebounds that they had nothing left for the offensive duties. Portugal took full advantage and went into the final quarter leading (50-33). Belgium found their legs in the final quarter and started to chip away at the lead. When Lieve Rombouts connected from the land of many, Manuel A. Rodríguez the head coach from Portugal asked for a time-out despite leading (52-40). The time-out proved to be fatal for Belgium as they failed to score again in this year's quarter-final of the FIBA Europe U20 European Championship Women Division B competition. For Portugal Correia led the scoring with 18 points while Da Silva chipped in 15 and Brandao 11 in the victory (59-40). 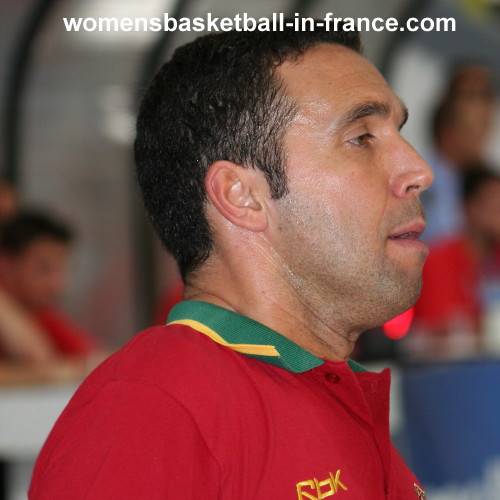 The Portugal coach Manuel A. Rodríguez (speaking in English) talks about the defense of this team and the nickname of "fight club".

(Note: If you are using Internet Explorer click twice on the triangle)