It took just four seconds for the Czech Republic to get on the scoreboard with three quick passes from the tip-off.

Lenka Bartáková concluded and the period for observation was over.

Miete Celus responded on the next Belgium attack with a trey. However the relief was not long as Katerina Zavázalová scored again for the Czech Republic.

With Celus getting to the charity stripes soon after, the teams had combined for 9 points within 60 seconds.

The fireworks did not continue as the Czech Republic did not allow Belgium any chance of getting in the paint as they went on a 15-2 run to open a lead (20-7) with 90 seconds left in the quarter.

Emmanuella Mayombo gave everybody a scare as she ended up in the publicity board after driving for the basket. She picked herself up and went 1-of-2 from the charity stripes.

Dana Kuslitová finished the scoring as she concluded a fast break move for the Czech Republic to lead (22-8) at the first quarter. 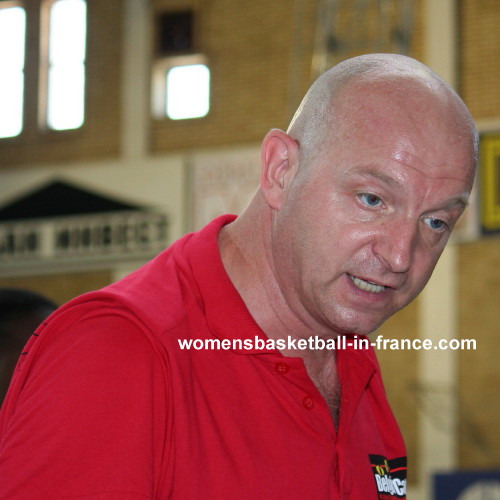 The Belgium coach, Benny Mertens (right), did not mince his words as he told his players to wake up during the two-minute pause.

The Czech Republic put up a defensive wall that Belgium could not find a way through.

They then were further punished by being cut of their passes (steal/interception/turnover) for the Czech players to score at will to lead by more than 20 points with just 14 minutes played (32-12).

Belgium looked tired and went into the interval trailing (20-46).

The players looked positive at the start of the third quarter, but allowed Alena Hanusová to score four seconds into the game. 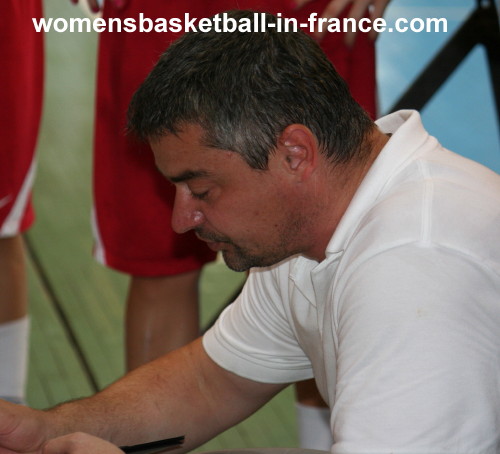 Belgium huffed and puffed but had to wait for more than 90 seconds to score. They kept up the pressure. However once the Czech Republic were more than 30 points clear (54-23) with just 22 minutes played the contest was over.

Jiri Johanes (left) did not let up and changed five for five constantly as his side stretched their advantage (72-31) going into the final quarter.

Hanusova led the Czech attack with 20 points in their victory (86-37). Petra Záplatová was the only other player in double digits from either side with 11 points.

Veronika Cernáková (left) was a young lady on a mission as she scored 8 of her team's first 10 points. This included a couple of three-pointers to put the Slovak Republic in charge with just under three minutes played.

A three-pointer from Anna Kavasila from Greece briefly interrupted the Slovak's run as Cernáková had her 10th point of the game for her team to lead (12-3).

Greece struggled with the zone defense of their opponents. Yet when they achieved to get through they had no luck in scoring and went into the interval trailing (18-33).

The Slovak Republic started the third quarter with the original starting five with Cernáková resuming her scoring festival with two baskets in 10 seconds. She then allowed her team-mates to score as her side went 20 points clear (45-25) with 14 minutes played.

Greece's ability to score from beyond the arc was the only reason the contest was still on. All the same the Slovak Republic went into the final quarter leading (47-34).

Greece went to sleep during the final quarter and the game turned into a training exercise with the Slovak Republic winning (63-37) with Cernáková as only player in double digits with 20 points.

Hungary had an easy run

Andzelika Mitrasinovik who was hurt on day three was back in the starting line-up for Macedonia.

Hungary scored most of their points on fast breaks. But it was their superior rebounding that enabled them to open up a 10-point lead towards the end of the first quarter (17-7).

They made just one mistake, allowing Antic one centimetre of space which she then used to hit a floating jump shot for the last points of the first quarter (9-17).

Hungary continued with the same tactics at the start of the second quarter and scored 6 unanswered points (21-9) in the first two minutes.

Antik started the Macedonian revival. With Vanesa Vasilevska scoring 5 points (2+3) the home fans were back on their feet and the match finally took off (16-23).

However it was the Hungarians that stepped up with simple fast plays and long passes to out-score their hosts to head into the locker room leading (35-20).

Hungary did not change their tactics after the break. They scored the first 5 points of the quarter to go 20 points ahead (40-20) with 18 minutes left to play in the game.

Antik, with more room to work in, quickly hit back with 5 points. Vasilevska added 2 more points and the fans were back on their feet.

The Hungarian coach Zeljko Dokic did not panic and continued his rotation. His side was back in charge and was leading by 24 points (55-31) going into the final quarter.

The final quarter was a non-event with Hungary pacing themselves to victory (72-41).

For Hungary four players were in double digits with Fanni Fehér leading the scoring with 11 points, followed by Györgi Öri, Dominika Gergely (right) and Alexandra Theodorean with 10 points each.

For Macedonia Antik had 23 points while Vasilevska contributed 10 points.