Slovenia got past Russia 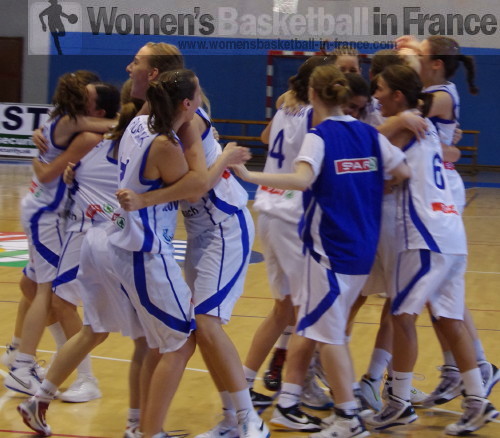 The double act of Nika Baric and Tjasa Gortnar with a combined total of 47 points helped Slovenia to beat Russia (70-57) for their first victory in their history in Division A.

Russia had the better start to the game and scored the first 6 points of the match in just 75 seconds.

Damir Grgic calmed his players down and switched defensive systems to keep Russia scoreless for the remaining eight minutes while his side took the lead to win the first quarter (15-8).

Russia were short of ideas at the start of the second quarter. Then Slovenia went 12 points clear (32-20) at one stage but went into the locker room on a negative run with a lead of just 5 points (36-31).

Svetlana Efimova stepped up for Russia after the break and scored all her team's points as they reduced their deficit (37-39).

However Russia were unable to get any closer as the two teams traded baskets until the 28th minute.

Gortnar (left) dominated her territory in the paint as Slovenia were allowed a free run to go 12 points clear with five minutes left to play.

Baric finished the game with 24 points and 10 rebounds while Gortnar chipped in 23 points and 9 rebounds.

Belgium paid for a poor start 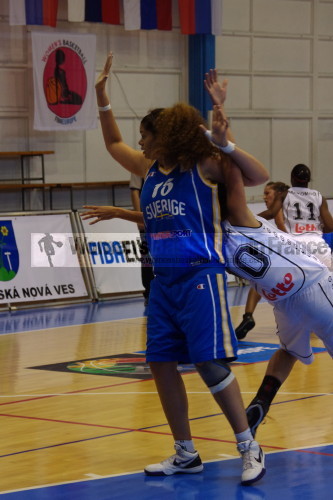 Sweden scored the first 14 points of the match with Sandra Hasahya and Amanda Zahui (right) contributing 12 of the points.

Emmanuella Mayombo ended the barren spell for Belgium and the two teams traded baskets for the rest of the first quarter.

Sweden went into the second quarter leading (21-12). The match became rather scrappy with a lot of turnovers from both sides. All the same Sweden extended their advantage (38-21).

The third quarter was a non event in terms of basketball with Sweden maintaining their hold (47-31).

Belgium raised their game during the final quarter and put together a 9-1 run to reduce their deficit (40-48).

This was as close as they came to upsetting Sweden who went on to win (56-45).

Zahui finished with 19 points for Sweden while Silke Storme led the Belgium attack with 9 points. 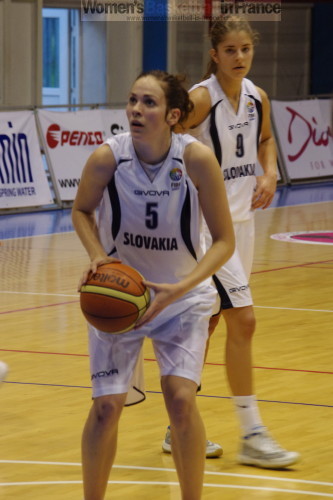 A nervous opening from both teams resulted in a stalemate as neither side was able to put a run together of any significance. However Milica Toskovic from Serbia did light up the first quarter with a three-point buzzer beater for her team to lead (19-16).

Martina Kissová (left) did her best to keep the Slovak Republic on track against Serbia with 8 second-quarter points which helped them to go into the locker room leading by a single point (33-32).

Nothing happened offensively during the third quarter with just 15 points scored, leaving the teams tied (41-41) going into the final quarter.

The Slovak Republic stepped on the accelerator and scored 17 unanswered points to end the game as a contest as they cruised to victory (67-52) with Kissová leading the scoring with 22 points.

Spain started the game slowly allowing Hungary to have the better start (8-4).

But Spain quickly turned things around by scoring 12 straight points which enabled them to edge the opening quarter (16-10).

Spain extended their advantage to double digits (26-14) with just under five minutes remaining in the first half of the match.

Hungary took advantage of a drop in concentration and intensity by their opponents to reduce the deficit at the interval (23-30).

Spain were another team after the break with Queralt Casas (left) and Mariona Ortiz scoring 9 and 4 points respectively during the third quarter.

In addition with Marta Claret, Laura Gil and Elena Díaz playing to their strengths, Spain started to dominate and went into the final quarter leading (50-34).

The final quarter was one-way traffic with Spain doing all the scoring to win the match (72-40).