Croatia did most of their work inside the paint in holding off Belgium (58-51).

Belgium scored 33 points from beyond the arc with 11 treys. But they were unable to get into the paint and just managed 4 points under the basket.

Croatia on the other hand did all their work close to the basket. They scored 36 points under the basket and hit just 1 shot from beyond the arc.

For Croatia Andrijana Cvitkovic (left) led the way with 17 points while Iva Cigic contributed 11 points. For Belgium Camille Lebrun led the way with 20 points of which she hit 6-of-10 from beyond the arc.

Belgium had the better start to the game and hit 4 treys during the first quarter to lead (14-12).

Croatia's superior play inside enabled them to go 9 points clear (26-17) with five minutes left till the interval.

Lebrun fired in a couple of treys as Belgium reduced the deficit at the interval to 5 points (25-30).

The start of the third quarter was tough on both sides as they were unable to get into an offensive rhythm.

Cigic from Croatia finally found her way to the basket with 7 points as her team went 10 points clear.

Belgium finished the quarter with a couple of three-pointers (39-41) and regained the lead with another trey from Lebrun (47-45) with just under eight minutes to play.

Croatia changed defensive systems and did not allow Belgium any room for three-point shots while Ana-Marija Begi and Cigic went to work in getting the advantage back (51-49) with four minutes to play.

Cvitkovic did the rest of the scoring for Croatia, mainly from the free-throw line in a scrappy finish.

Serbia got past Turkey

Turkey came into the match on the back of five victories and appeared to have everything under control leading (19-12) by the end of the first quarter.

Turkey continued to control the match despite not scoring during a defensive error-prone second quarter to go further ahead (28-19) at the interval. 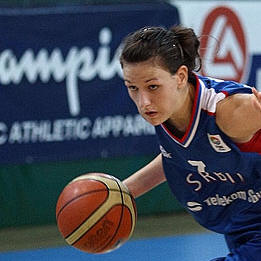 After the break Natasa Kovacevic (right) from Serbia took over leading her team as they went in front briefly (35-32).

A three-pointer by Didem Nakas was enough for Turkey to sneak back in front going into the final quarter (38-35).

The last 10 minutes were a ding-dong affair with the game going back and fourth with the lead changing hands several times.

With 20 seconds left to play they were again level (49-49) until a three-pointer by Kovacevic sealed the victory for Serbia.

France brought an end to Spain's series at U16

Since the creation of Division A at U16 level in 2004, Spain had always qualified for the final, winning the title on five occasions.

Their only loss in a final came in 2007, when they were beaten by France (57-60), the same score as this quarter-final match. 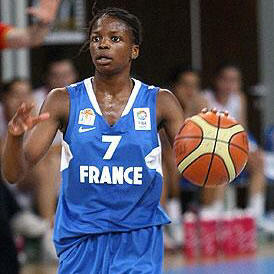 Olivia Epoupa (right) from France and Elena De Alfredo from Spain led their teams in what can only be described as a FIBA Europe U16 classic.

The first quarter went back and forth with the lead changing hands on every possession. France managed to edge the quarter with free throws from Epoupa and Valériane Ayayi (21-15).

Spain reduced the deficit during the second quarter with their inside play (29-30).

The third quarter was intense with both teams having their moments with France holding onto the advantage (49-47).

France stayed in front all the way and with 42 seconds left to play they appeared to have the game won (60-54).

Evaristo Pérez the head coach from Spain called his second time-out of the quarter with about 36 seconds left to play.

He explained carefully what he wanted and six seconds later Laura Aliaga fired in a trey for Spain.

France were then under pressure and when Axelle Koundouno's shot failed to drop Spain had a chance to take the game into overtime with the very last shot of the game.

However Irene Gari's buzzer beater three-point attempt failed to drop and Spain were out.