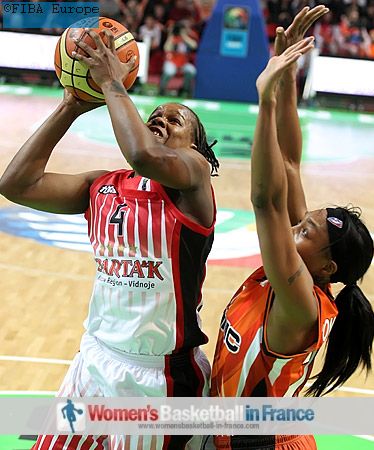 Céline Dumerc's only points of the game came within the first 30 seconds to give UMMC an early lead.

However the next four minutes were rather scrappy with neither side able to get going offensively with just back to back scores from Taj Mc Williams for the defending champions (4-2).

The last five minutes of the first quarter were more exciting with the lead changing hands on each basket.

The defending champions came out on top with an Epiphanny Prince (Epifaniya Prints) (above) scoring the last basket (15-14).

UMMC scored 7 unanswered points during the first three minutes of the second quarter to open the first lead of any significance (22-15).

However the quality of finishing did not improve with both sides missing the unmissable.

Despite Sparta&K Moscow Region turning the ball over more often than their opponents they went into the interval trailing by just 5 points (22-27).

UMMC stretched their advantage to 9 points (31-22) with two minutes played in the third quarter.

Sparta&K Moscow Region stepped up defensively and dominated the last eight minutes of the quarter while putting together a 13-0 run to edge back in front (35-31).

With Candace Parker going 1-of-2 from the free-throw line the hosts ended the negative series.

Yet the defending champions scored on the buzzer through Prince who picked up a lose ball from a three-point attempt by her team-mate Jelena Milovanovic (37-32).

This was a close as they would get as they went on a missing festival while their guests scored 7 unanswered points including back to back scores from Mc Williams to take charge of the game for good.

The defending champions paced themselves for the remaining minutes to win the match (54-43).