Candice Dupree can do a lot of things: she scored 22 points and took 13 rebounds for Good Angels Kosice. However this was not enough to stop Cras Basket from taking the victory.

Wisla Can-Pack made up for their opening day loss against USO Mondeville by winning (65-47).

Mondeville are going through a lean stretch at the moment. They allowed the hosts to lead (11-3) early in the first quarter and were unable to catch up for the rest of the game.

Ewelina Kobryn scored 19 points for Wisla-Can Pack while Valeriya Berezhynska was the best player for Mondeville with 14 points and 11 rebounds.

Wisla Can-Pack move into second place behind Cras Basket with 4 wins while Mondeville share third place with Good Angels with 3 wins each.

Kelsey Griffin led Pécs 2010 with 17 points in only their second victory of the season.

EuroLeague Women Group B: Home advantage counts in round 6

MKB EuroLeasing had beaten Lotus Gdynia on the road but required a special offensive performance by Angel McCoughtry with 32 points to get by their opponent (88-76).

The game remained close until the final quarter when the hosts managed to break away. Zane Tamane contributed 20 points while Tijana Krivacevic scored 16 points. Monica Wright scored 23 points for the Polish team.

Nevriye Yilmaz (left) was the leading scorer for the Turkish side with 24 points while Courtney Paris led Rivas Ecópolis with 19 points and 10 rebounds.

However it was the shooting of Spanish international veteran Elisa Aguilar with 4 triples and a total of 18 points and the hustle of Amaya Valdemoro (17 points) that kept this game entertaining.

UMMC Ekaterinburg were never in trouble in this match and had the game won by the end of the third quarter.

Maria Stepanova, Crystal Langhorne and Cappie Pondexter with 20, 16 and 15 points each did the bulk of the scoring for the Russians.

For the French internationals, Sandrine Gruda scored 6 points while Céline Dumerc had 7 assists and 0 points.

Maurita Reid led the attack for Gospic with 23 points.

EuroLeague Women Group C: Tarbes are back in the picture

Like in Group B, it was a good night for playing at home with 100% success.

Ana Cata-Chitiga (left) has waited patiently for three years to get her professional career going and at the moment she is the talk of the town in Tarbes.

She led Tarbes to victory during the weekend in the French domestic league and she did it again with 22 points in the victory against Galatasaray MP (68-57).

Tarbes stayed in front all the way to the finish. Jelena Dubljevic added 15 points while Florence Lepron scored 10 points. Both players also had 5 assists.

For Galatasaray, Sylvia Fowles scored 17 points and pulled down 11 rebounds. Tarbes move into fourth place while Galatasaray drop to fifth.

Ros Casares appeared to have everything under control leading (56-50) going into the final quarter.

However the final quarter turned into a shoot-out with a total 63 points scored.

The Russiand took the lead for good with four minutes remaining and held on for just their second win of the season.

Bourges Basket waited until the second half of the match to put away their hosts KSSSE AZS-PWSZ Gorzow.

Bourges went into the interval trailing (32-40) but then conceded just 26 points in the second half while scoring 56 points. 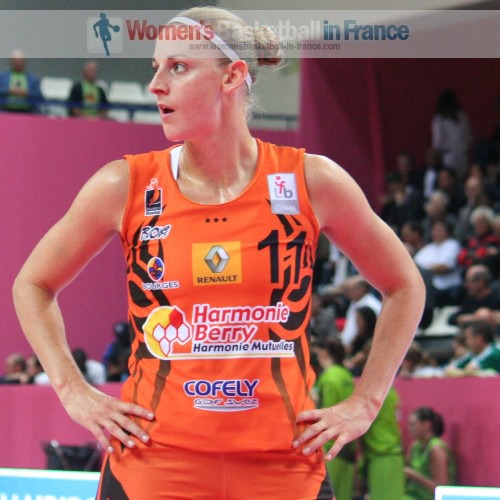 Cathy Joens went 6-of-8 from the land of many and finished the game with 26 points.

Frisco Sika Brno have improved since the opening day and were 55 seconds away from claiming their second victory when disaster struck.

Liron Cohen fired in a triple which turned out to be the game winning shot for Beretta Famila (68-67).

Isabelle Yacoubou-Dehoui led the Italian attack with 21 points while Cheryl Ford hit her fourth double double and had 23 points and 12 rebounds for the hosts.