The rest of the EuroLeaue Women news

Cras Basket got their campaign of to a good start by beating Good Angels Kosice (74-59) with 17 points coming from Kathy Wambe. However the top scorer award went to Zuzana Zirkova who scored 27 points in a losing cause.

Isabelle Yacoubou-Dehoui with Beretta-Famila Schio made light work on the new look Frisco Sika Brno with a comfortable victory (89-44).

Yacoubou-Dehoui was one of five players in double digits for Beretta-Famila with 13 points.

Raffaella Masciadri was the leading scorer with 17 points while Laura Macchi finished with 16 points and 5 assists.

For Brno who signed Frida Eldebrink this season, it was Swedish team-mate Louice Halvarsson who top scored with 12 points. 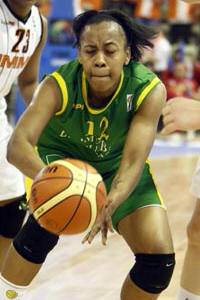 Home court advantage worked in favour of Pécs 2010 who held off a late challenge from TTT Riga to win (66-60).

Alexandria Quigley and former Bourges Basket player Nora Nagy-Bujdosó were the only players from Pécs 2010 in double digits with 15 and 11 points each.

MKB Euroleasing Sopron travelled to Poland to play Lotos Gydnia and returned home with all the points after winning (82-67).

MKB had a double-digit lead by the end of the first quarter (28-17) and maintained control of the game to the end.

It has not been a good round for Polish clubs with all three teams losing.

You can read about the games played during the first day of EuroLeague Women action.