Mondeville shine in the only EuroLeague Women game in Group A

USO Mondeville got in their qualifying round challenge off to a perfect start with a victory against last season's fairytale team Wisla Can-Pack (76-65).

Mondeville fired in a total of 9 three-pointers from 17 attempts as they made up an early second-quarter deficit (25-37) to run out winners. 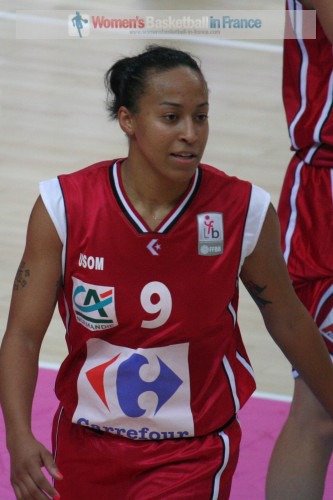 Mondeville went to work during the third quarter. With back to back shots from the land of many by Lenae Williams and Valeriya Berezhynska, they went into the final quarter leading (52-50).

With K. B. Sharp (right) giving assist after assist and the long shots hitting the basket Mondeville rolled to victory.

Williams went 4-8 from beyond the arc to lead the scoring with 20 points. Aija Brumermane added 12 while Pauline Thizy finished on 10 points. Sharp scored 6 points but dished out 7 assists.

For Wisla Can-Pack Erin Philips was the pick of the player with 18 points.

In the only EuroLeague Women tie of the evening in this group Ann Wauters went a perfect 7-from-7 from the field with 14 points while Sandrine Gruda added 17 points as UMMC pulled off a road victory against Gospic Croatia Osiguranje. 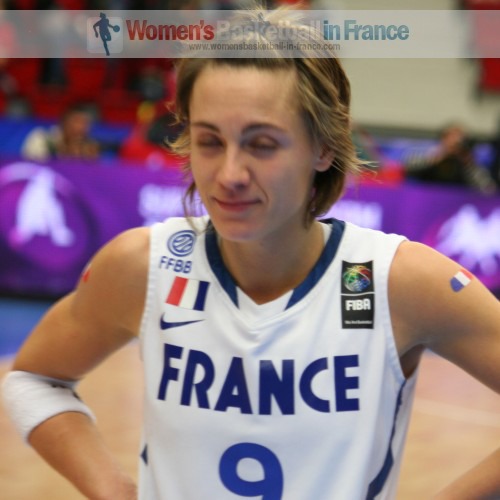 Maurita Reid (20 points) caused UMMC all kinds of problems early on. It was until Wauters, helped by Agnieszka Bibrzycka (11 points), started to pull away late in the second quarter.

Céline Dumerc (left) scored just 3 points for UMMC but dished out 3 assists. Cappie Pondexter and Crystal Langhorne both scored 12 points each while Deanna Nolan who is officially Russian in the eyes of FIBA scored 8 points and dished out 5 assists.

Group C has already been described as the EuroLeague Women group of death this season.

As a result of Sparta&K Moscow Region losing on day one and Halcon Avenida just scraping through it appears that analysts might be right in the name they have given for the group.

Epiphanny Prince who is playing for Sparta&K Moscow Region has a new name. She has become Russian and is now called Epifaniya Prints.

Prints also top scored for her side - in their opening day defeat against VICI Aistes - with 22 points and 5 assists.

VICI Aistes were cruising at one stage leading (42-24) late in the second quarter.

Sparta&K fought back and with just over two minutes left to play Print levelled the tie (76-76).

Irina Osipova gave the visitors the advantage in the last minute. It then appeared that the four-time defending champions would steal the win.

However Ausra Bimbaite had other ideas and hit a difficult three-point shot to level the game and practically on the buzzer hit the winning basket.

In the game in Prague it was Alba Torrens (left on picture) pouring in 20 points with Halcon Avenida that walked away with the victory (66-65).

In an exciting game in which both sides did not have a good shooting game ZVVZ USK Prague went in front (63-62) with just over a minute to play.

Torrens replied with a BIG three-pointer before Silvia Dominguez sealed the victory by splitting a pair of free throws.

Alain Jardel from Tarbes must have been wondering what happened to his players as they conceded 19 straight points against Galatasaray to trail (2-21) with less than seven minutes on the game clock.

With the damage already done his team huffed and puffed their way back into the game to trail by (34-38) at the interval.

Sylvia Fowles (16 points and 11 rebounds) and Seimone Augustus with 20 points were just too strong and Galatasaray weathered the storm and then cruised to victory (84-68).

Ros Casares' and Bourges Basket's experience made the difference

Katie Douglas and Edwige Lawson-Wade scored 17 and 16 points each and combined for 5-of-8 from beyond the arc as Ros Casares picked up a valuable EuroLeague Women road win against Orenburg Nadezhda (76-68).

Rebekkah Brunson was the other big scorer with 15 points.

For the hosts Tina Charles (left) fired in 23 points and picked up 13 rebounds while Becky Hammon scored 15 points and delivered 6 assists.

KSSSE AZS-PWSZ Gorzów led (36-29) with 22 minutes played but then only managed 14 points for the rest of the game.

While Nwal-Endéné Miyem and Cathy Joens take much of the credit for their combined total of 38 points, Anaël Lardy should not be forgotten for her 7 assists.