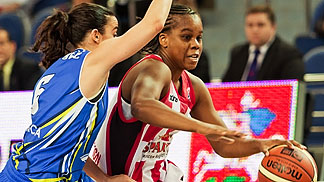 Tarbes welcomed Sparta&K Moscow Region and finished empty handed for their sixth defeat of the season.

The defending champions, who had Sue Bird playing, won (78-61) with 21 points coming from Epifaniya Prints (Epiphanny Prince in picture).

They never trailed in the game and went 10 points clear by the end of the first quarter (23-13) to pace themselves to victory.

Sonja Petrovic and Ilona Korstin who have both played in France for Bourges Basket scored 11 and 7 points each while Bird scored 12 points.

Tarbes are currently bottom of the group but can still qualify for the play-offs next week.

They must beat VICI Aistes and Galatasaray has to lose at home to ZVVK USK Prague.

The clubs fighting for ranking positions

Fenerbahçe maintained their unbeaten record with a hard fought victory against Polish club side Lotos Gdynia (77-64).

Monica Wright fired in 23 points for Lotus but with this defeat her side is eliminated from the competition.

In the other game from Group B, Rivas Ecópolis were involved in an exciting game with Gospic Croatia. Rivas held on to win (99-89) to book their ticket into the play-offs while Gospic are eliminated.

In the final game from Group D, Beretta-Famila beat Nadezhda Orenburg (74-66). Both teams had already qualified from the group.

You can read all the EuroLeague Women news from the first day of action of the ninth rounds.


The current EuroLeague ranking table is as follows: