After the interval Bourges applied new tactics and drew their opponents into committing fouls which resulted in Bourges scoring 5-from-6 points from the free-throw line in an opening 7-0 run.

The hosts were for the first time in the match a little lost. So Bourges took full advantage to open up the first significant lead of the game (45-33) midway through the third period.

Bourges then controlled the pace of the game for the rest of the quarter and went into the final quarter leading (51-40).

The hosts never got in a position to trouble Bourges for the rest of the game and the game fizzled out with Bourges winning (64-53).

Miyem led the way with 16 points and 9 rebounds. Carson added 13 points for Bourges Basket while Dupree with 16 and Hrickova with 12 points led the way for the hosts.

Jelena Milovanovic (left) was doubtful for MKB Euroleasing Sopron EuroLeague Women match because she had been in hospital for dizziness and blurred vision.

It appears that she has recovered because she scored 21 points in her team's (78-64) home victory against KSSSE AZS-PWSZ Gorzow.

Rivas Ecopolis travelled to Prague and defeated ZVVK USK Praha (83-76). Rivas did the damage in the first quarter. 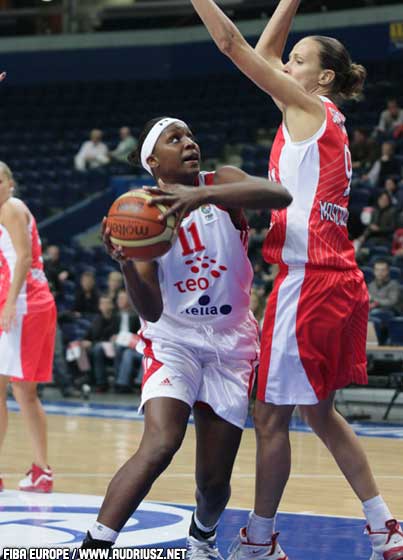 Rivas went into the second quarter leading (22-4). But a barrage of three-pointers from the hosts reduced their lead to 3 points by the break (40-37).

Lindsay Whalen was a lady on a mission at the start of the third period and scored 7 straight points for ZVVK to take the lead (44-42) after 22 minutes.

Rivas woke themselves up and by the end of the third quarter they led (62-54).

They did not allow their hosts a chance of getting back in the final quarter and won (83-76) with 32 points coming from Crystal Langhorne (left).

She also picked up 11 rebounds while Spanish international Anna Cruz added 16 points and made 5 steals.

Katerina Elhotova was the top scorer for the hosts with 18 points. Cathrine Kraayeveld and Whalen added 17 and 16 points each.

Lotos Gdynia and Tarbes’ encounter had all the ingredients of good EuroLeague Women basketball: action, suspense, drama and good basketball.

Even when the game was held up for five minutes in the final quarter due to problems with the electronic scoreboard, the crowd, the players and the coaches took it all in good humour.

As for the match itself, the first 20 minutes was a case of both teams playing cat and mouse with the lead changing hands eight times. At half time the match was tied (31-31).

After two minutes of the third quarter both teams were on equal terms (40-40).

They neutralised each other until Shameka Christon (19 points and 4 assists) was left open for a split second. She hit a trey that put the home side in the lead (43-40).

Both sides still found it difficult to score until Christon fired in her second trey of the quarter. Immediately Pauline Jannault for Tarbes responded with trey.

The pace of the game went up with Charde Houston (19 points and 10 rebounds) and Isabelle Yacoubou-Dehoui (10 points) brought Tarbes back on level terms (49-49).

Erin Phillips (14 points and 6 assists) finished the scoring with a trey for Lotus to go into the final quarter ahead (56-51).

The last period started well for the hosts with Matovic hitting a baseline jumper. But Florence Lepron (7 assists) was allowed to run into the paint and then perform a reverse spin to score for Tarbes.

This was the only success Tarbes had while Lotus moved 10 points clear with Christon scoring 5 points (63-53). The game was then held up due to problems with the electronic scoreboard.

After the interruption Matovic added 2 more points for the hosts.

The introduction of Isis Arrondo (left) for Tarbes with just over five minutes left to play made Tarbes more lively.

Her speed and youthful exuberance caused her opponents problems and was the catalyst Tarbes required.

Her first action was a long pass to Frida Eldebrink (15 points) who then hit a three-pointer. With the game in money-time, Tarbes trailed by 6 points.

With just over a minute to play, Eldebrink managed to provoke a foul from nothing and was sent to the free-throw line. She hit the first throw and missed the second which was rebounded by Houston.

However the officials blew their whistle because a player from Lotus had moved too early.

Eldebrink had to retake the throw again.

She repeated the same throw that bounced on the ring and fell into the hands of Houston who then scored and picked up the foul.

Houston hit the free-throw and with just over a minute left to play Tarbes trailed (64-67).

Tarbes had no choice but to foul the Lotus players to stop the clock. But Paulina Pawlak and Emilija Podrug kept their cool at the free-throw line with 6-from-6 to hold off Tarbes (73-68).

On Tuesday evening Frisco Sika Brno beat Fenerbahce (74-66) to the relief of their coach Jan Bobrovsky. He explained that his team played their best basketball of the season during the fist 20 minutes.

He does not have a big roster this year and with Zuzana Zirkova not playing, the second half of the game was more difficult. He was more than satisfied that his team held on to win their first EuroLeague Women tie of the season.