In Group C, Bourges Basket have assured further participation with a victory (66-58) against Rivas Ecópolis.

The final qualifier from this group is ZVVK USK Prague who eliminated MKB Euroleasing (96-93) on the road.

Wisla Can-Pack were pushed all the way by Gospic Croatia and escaped defeat by a single point (85-84). Halcon Avenida closed the group phase with a home victory against Beretta Famila (80-62).

In Group A, UMMC Ekaterinburg made it a perfect evening for Russian clubs with a comfortable victory (92-53) against TTT Riga.

In the remaining games all the home teams won with Ros Casares beating Galatasaray (77-47) and Cras Basket winning (81-53) against Vilnius TEO.

Select the links below to read the EuroLeague Women basketball news from all the groups:

UMMC Ekaterinburg made sure of winning their group and finished second in the ranking by beating TTT Riga by 39 points (92-53).

UMMC paced themselves for the rest of the game and had five players in double digits with Svetlana Abrosimova leading the way with 21 points.

UMMC have finished in second place behind Spartak Moscow Region. Provided both teams get through the next rounds they will face each other during the EuroLeague Women final four.

Rebekkah Brunson led Cras Basket to victory against TEO Vilnius with 20 points and 9 rebounds. Lindsey Harding who replaced Renee Montgomery at TEO, fired in 23 points to lead all scoring.

Ros Casares did not give Galatasaray much chance to settle into the game and won by a comfortable margin (77-47) with Amaya Valdemoro leading the way with 21 points.

Galatasaray were not at full strength for the match because Yelena Leuchanka was absent due to injury. At the same time Jia Perkins left the club last week to return home for personal reasons.

Tamika Catchings will be joining Galatasaray in time for the next round of EuroLeague matches.

In the final Group A table, only the top teams continue the EuroLeague Women adventure. 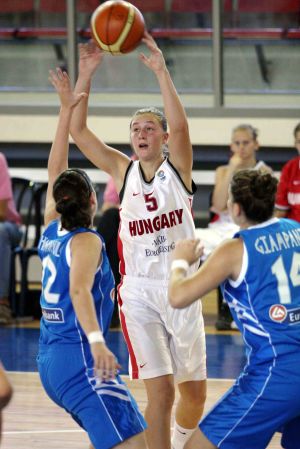 Villeneuve d'Acsq may have a squad of former youth international basketball players that have won plenty of medals for France. However it was the current youth internationals from MiZo Pécs 2010 that stole the show as their team won (94-42).

Krisztina Raksányi (left) and Sara Krnjic are two talented players from the 1991 generation and there are also the 1990 born players Nikolett Sarok and Nóra Ruják.

The senior players for MiZo Pécs set the pace with Anna Vajda with 29 points before leaving the youth players to finish off the game.

Abdou N’Diaye from Villeneuve decided also to allow his youngest players, Fatim Traore and Rudiane Eduardo, both 93 born to finish the game.

N’Diaye explained during the after-game press conference: "It was a very weak night for our team. But we are not so sad because our players are very young and we will be better in the future."

Gospic Croatia that were playing for pride at home scored 14-from-34 attempts from beyond the arc in the loss (84-85) to Wisla Can-Pack Krakow.

Gospic had the chance to win in the last second but the ball refused to drop. Carla Thomas and Anđa Jelavić scored 23 points each for the hosts.

Ewelina Kobryn led the scoring for Wisla Can-Pack with 15 points and 14 rebounds.

Alba Torrens, Sancho Lyttle and Le'Coe Willingham scored 63 of the 80 points for Halcon Avenida in the victory against Beretta Famila (80-62).

Bourges Basket had to win to assure qualification with Pierre Vincent, the head coach of Bourges, taking no risks.

His team's suffocating defensive system stopped Rivas Ecópolis from getting into an offensive rhythm.

Lindsay Whalen fired in 28 points which included the game winning points for ZVVZ USK Prague to edge out MKB Euroleasing (96-93).

Jelena Milovanovic scored 31 points for MKB Euroleasing. But it was not enough for the win and last season's final four participants are eliminated.

Spartak Moscow Region did the damage in the first 10 minutes against Lotos Gdynia (32-13). They played the last 30 minutes in cruise control and won the match (85-60).

Sue Bird, Sylvia Fowles, Diana Taurasi had their dominating spells and each player finished in double digits. Sonja Petrovic with 10 points in 12 minutes was the fourth Spartak player in double digits.

Spartak are the only team to come out unbeaten after the first phase. 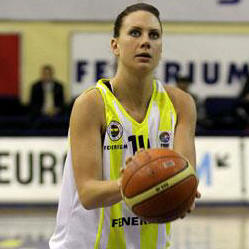 Tarbes travelled to Turkey with one objective in mind, that was to come away with the victory. However without Frida Eldebrink they were a little short on fire power.

Tarbes also had the bad luck on meeting Penny Taylor (right), who shot 29 points in 28 minutes as Fenerbahce eliminated them from the competition (82-69).

Frisco Sika Brno's form has been patchy lately and they had to wait for some magic by Hana Horakova with five minutes to play.

Her trey put Brno in the lead for good and sparked a 11-2 run to finish the game.

Review the EuroLeague Women news from the previous round