After the success of the men's handball team in Athinaikos, it is now the turn of the women's basketball team to become centre stage with the qualification for the final. 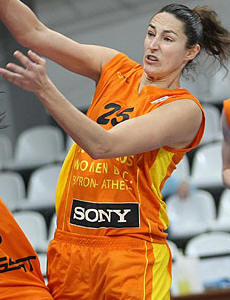 Athinaikos, playing at home, took hold of the tie by opening a 10-point advantage by the end of the first quarter (19-9) with Dimitra Kalentzou leading the scoring with 6 points.

The second quarter was a ding dong affair with Athinaikos remaining in front throughout to go into the interval (36-26).

Ruth Riley (right) turned back the clock and came up with some of her trademark moves to maintain the advantage of Atinaikos (43-33) midway through the third quarter.

Dynamo Kursk continued to battle away with Michelle Snow and Jillian Robbins doing most of the offensive work. But they left themselves too much to do trailing by 13 points (39-51) when they went into the final quarter.

The Greek fans will be back in Athinaikos for the second leg of the final on 8 April 2010.