Michelle Snow was quickly into her stride and scored Dynamo's first 6 points as they raced out to an early lead (9-4) with a little over four minutes played. 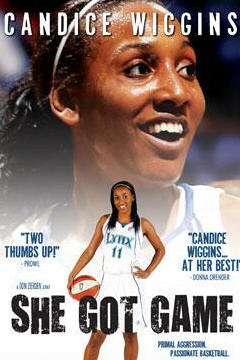 Candice Wiggins, back to full fitness, ended the hosts early dominance with a trey for Sony Athinaikos. However early foul problems for Gintare Petronyte hindered their progress.

Jillian Robbins took over from Snow in the scoring department as Dynamo Kursk increased their advantage (15-7).

Wiggins was on target again from behind the arc and also from inside the paint to keep her side on the tail of their hosts after the first ten minutes (12-16).

Wiggins continued her crusade and was rewarded with a couple of free-throws. Ruth Riley completed the comeback to tie the game (16-16) with 12 minutes played.

Snow for the hosts and Wiggins for the guests continued their festival with Dynamo hanging on to the lead (28-24) with two minutes remaining before the interval.

Wiggins, with her 18th point of the game, levelled the score once more before Petronyte put the guests in front.

Snow split a pair for her 13th point of the game. But it was Athinaikos that went into the interval ahead (30-29).

After the break Athinaikos stepped up defensively and kept Dynamo scoreless for four minutes while scoring 8 points.

Snow broke the deadlock with back to back scores for the hosts after which the teams traded baskets for the rest of the quarter.

Athinaikos started the final ten minutes in front (46-41). They increased their advantage to 7 points seconds after the start with 2 points from Greek international Dimitra Kalentzou.

Sandra Linkeviciene and Robbins reduced the home team's deficit to 3 points before Wiggins struck again with a 3-point play (2 +1 ).

Wiggins scored her last points of the game with four minutes left to play with her side leading (58-52).

Afterwards the game was scrappy with most of the points coming from the free-throw line and Athinaikos hanging onto the lead (64-58).

Saarlouis paid for a poor start

René Spandauw gave his players a day off on Monday as part of the preparation for this EuroCup Women semi-final. However he was not very happy with the way the match started.

Spandauw's players then used up a lot of energy in bringing the score down to finish the first quarter trailing by 6 points (14-20). 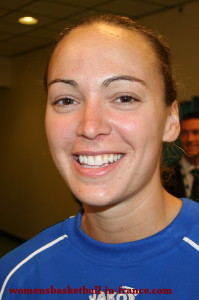 The Nadezhda trio of Sheana Mosch (right) and the Belarus internationals Tatyana Troina and Anastasiya Veremeenko kept the scoreboard ticking as the guests moved 12 points clear (28-16) with 14 minutes played.

Petra Manakova saved the hosts from a total collapse with a trey.

Her action woke up her team-mates: Candyce Bingham and Stina Barnert rediscovered their scoring touch to reduce the deficit at the break (26-32).

After the interval Nadezdah were soon in their stride and led by 10 points (38-28). Yet they were unable to build on their advantage whereas the hosts drew level for the first time (40-40) with 28 minutes played.

Nadezhda managed to go ahead again through Olga Ovcharenko to go into the last quarter with a slim advantage (44-42).

Saarlouis Royals drew level on two occasions during the first five minutes of the final quarter (52-52) without ever taking the lead.

Mosch's show started with two trademark drives to the baskets which put Nadezhda back in control (56-52) with 3:30 left to play.

Barnert connected from the land of many for the hosts. Yet Mosch ended her scoring show with a 3-point play for her last points of the game (59-52) with just under three minutes to play.

Saarlouis finished the game strongly but undid their work by gifting Katsiaryna Snytsina two trips to the free-throw line.

Nadezhda ended up winning the first leg of this EuroCup Women semi-final (62-56).